On this Memorial Day, we want to take some time to remember those who were killed in combat. Among them were several members of a B-26 crew from the 33rd Squadron. Their story is below.

On January 7, 1943, 1/Lt. Leonard T. Nicholson and his crew were flying to Lae with a couple of other B-26s to target ships in the harbor. As the three planes began their bombing run, the Japanese began sending up antiaircraft fire to discourage the American crews. The men flew on and released their bombs. As they turned, YEAH! was hit by two blasts of flak, one of which knocked out the left engine and damaged the hydraulic lines. YEAH!’s bomb bay doors fell open, causing an unsustainable amount of of strain on the only working engine. 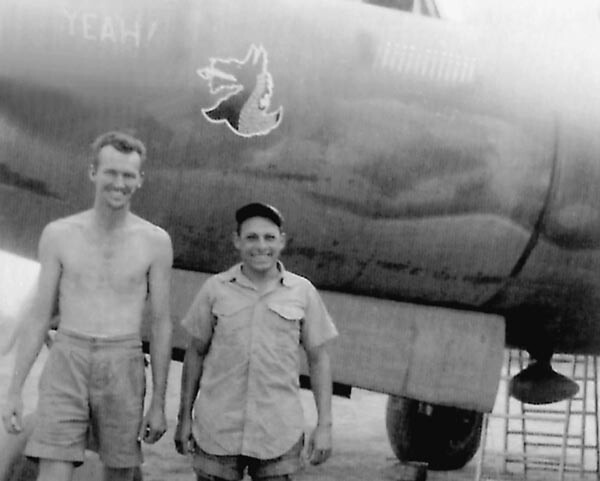 Two unidentified members of the ground crew stand beneath the Squadron insignia on the nose of YEAH!

By this point, nine Zeros had caught up to the B-26s and the pilots knew it was time to get out of there. Nicholson knew there was no way he would make it back to Port Moresby on one overheating engine and let the crew know that they should prepare to ditch the plane. The pilot landed in Hercules Bay, located north of Buna, and the crew hurried to get out of YEAH! Engineer Sgt. Jack G. Mosely and radioman S/Sgt. Joseph P. Papp unfortunately did not escape and went down with the plane. The rest of the men swam to shore, helping the severely injured navigator Lt. Norm E. DeFreese along the way. Once on the beach, gunner Cpl. Thomas A. Moffitt went off to find help for his crew. DeFreese did not live through the night.

The next day, three crewmen were walking towards Buna when they were spotted by Australian Beaufighters flying overhead. Food and a map were dropped to the men below. The relief that they must have felt was destroyed soon after by the sound of a gunshot. Bombardier S/Sgt. William M. Brown was killed by a Papuan Infantry Patrol that had mistaken the Americans for Japanese. The two remaining crewmen, the pilot and co-pilot, were separated during the chaos.

Co-pilot Lt. Jack I. Childers spent a couple of unbearable nights fending off mosquitoes in the open air and three days looking for someone who would help him get back to base. On the second day, Beaufighters espied him once again and dropped supplies. Childers’ situation changed on the third day when he spotted natives on the far side of the river and was able to flag them down. They took him to their village, where he spent a more comfortable night, then was taken to an Australian camp the following day. He soon learned that both Moffitt and Nicholson were alive and had been flown back to camp within the last couple of days. Childers would soon follow them and rejoin the rest of his unit.

This story can be found on p. 166 of Revenge of the Red Raiders.

6 thoughts on “YEAH! Goes Down”