Some humor out of the Pacific Theater. The following poem was included with a diary from Robert Pickard of the 71st Squadron, 38th Bomb Group.

In my shanty on the rise,

With the great mosquitoes buzzing

And the hordes of ants and flies.

You should see the snakes and scorpions,

And the centipedes and bugs,

And they’re not brought on by drinking

We’ve seen these things in Aussie

In the good old droving days,

And they often looked much bigger

Gazing through a drunken haze.

All these monsters in New Guinea

Were a curse and pest at first.

So the Jap can do his worst.

You couldn’t kill these mossies

If you used a bullock yoke.

So they use them now as bombers

When they’re properly tamed and broke.

The ants are much more docile,

Rather sluggish for a hack,

But they used a mob as pack mules

On the Owen Stanley Track.

The flies are rather flighty

And they take some breaking in,

But send them after Zeros, and

The flies will always win.

The snakes are used by sappers

On the flooded river ground:

They use them there as bridges

The scorpions, Joe, are streamlined,

And they blow the Japs to hell.

How to get stores over the mountains

Had the ‘Big Shots’ at a loss

‘Till they used the mighty centipede

To tow the stores across.

The bug’s a handy scout car

And he very seldom jibs,

But be careful when you touch him

Or he’ll kick you in the ribs.

The rats are wild and snorty

But the ‘Fuzzy-Wuzzies’ ride ’em

We came across another poem in our archives that you may or may not have already seen elsewhere. The writer, a Capt. John Carpenter, recounts the events of a typical bombing mission out in the Pacific Theater.

We dug up some more written work for all our readers. This poem or song comes from an unknown member of the 405th Squadron, 38th Bomb Group. We don’t know when it was written, but we hope you enjoy it. 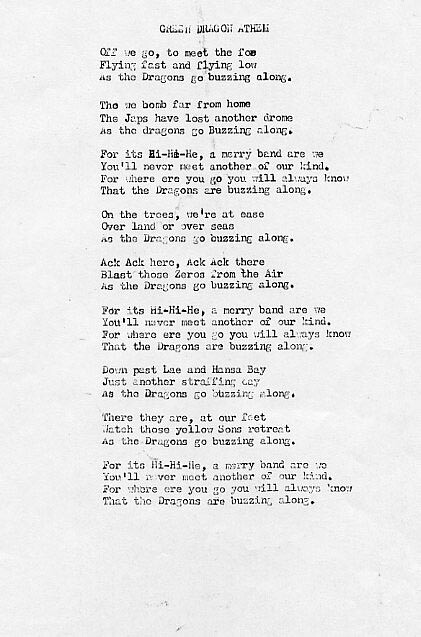 Since this one is a little harder to read, here’s the text in full:

Off we go, to meet the foe

as the Dragons go buzzing along.

The we bomb far from home

The Japs have lost another drome

As the dragons go Buzzing along.

On the trees, we’re at ease

Over land or over seas

Blast those Zeros from the Air

Down past Lae and Hansa Bay

There they are, at our feet

A little humor for your Friday. Enjoy this poem we found in our archives. 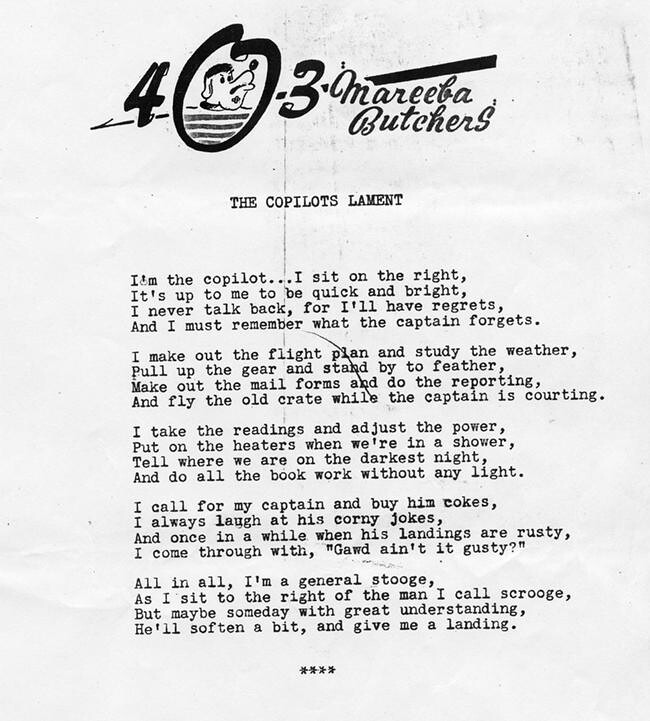