For each of our books, we carefully go through our various collections and pick out the best images for publication. For one reason or another, some of them simply don’t fit our criteria, but we want to share them because they’re still very interesting to look at. Recently, we ran across one such image, a map of the Japanese-occupied Salamaua area dated December 1, 1942. We believe the map’s data came from prewar sources as well as scouting commando units, as it appears to have prewar housing and military posts marked. At the time, the majority of the attention was on the brutal fighting in the Buna-Gona area, located south of Salamaua.

Over the years, we have dedicated quite a few blog posts to some of the strikes on Rabaul, and we have another one today. The Australian War Memorial posted an old film covering the big October 12, 1943 raid on Rabaul. Before getting into that particular mission, the film explains the logistics that the Allies had to work out weeks earlier. After tracing the Allied advance northward, it’s time for the first of several major attacks on the Japanese stronghold of Rabaul.

This descriptive entry comes from the diary of T/Sgt. Adrian Bottge, a member of the 89th Squadron, 3rd Bomb Group ground crew.

Smitty and Mata left on transport this morning. Loaded a plane and sat around waiting for the other transports. Didn’t show up. Then the two with the men on board came back. Had received orders to return at once because Jap planes were over Oro Bay. Made up loading list of photo supplies in afternoon. Went to show in evening. One of the fellows said there was a yellow alert. 50 Betty Bombers and 50 Zekes took off from Lae airfield 1/2 hr. before. They started the picture anyway. Had run a few minutes when the three shots sounded. We ran for our trenches but the Aussies were put out. Hollered to keep the show going. In a few minutes we heard the planes, shortly after we saw bomb flashes toward 14 mile. There were lots of planes and lots of ack-ack. Didn’t come over this far. Went back to the show “Ice Capades” and saw some more — then got the alert again. The Aussies were really disgusted this time. Hollered for everyone to sit down. We went to our trench, however and was glad to be in it. Lard and Mata hit a trench close to the movie area. We saw what seemed like hundreds of bomb flashes in the north. Was so noisy, one couldn’t hear himself think. Terribly warm and lots of mosquitoes in the trench. My knees felt like they would break in two — crouched down like we were. Those bombers left and it was quiet for about ten minutes. Then several more planes came over. Didn’t drop any bombs though they were right overhead. Dropped flares — possibly trying to photo the damage. One of our P70 nite fighters was there but hadn’t been able to gain enough altitude. Could see the Jap planes (in searchlights) shooting tracers at the P70. Went back tot he show and finally finished without interruption. Lars said the Aussies really scattered during the last raid. Tried to get into crowded trenches. Our boys told them, “Carry your a-s, this will teach you to move when the alert sounds.” They scurried around like rats looking for a hole. Shrapnel was falling like hail. Sounds like bumble bees in flight. 89ths A-20s made early morning raid on Lae yesterday. Strafed 6 bombers and 5 Zeros on ground. 90th lost another B-25 with six man crew. Poor 90th has taken it on chin. B-25 destroyed on ground at 14 Mile last night. B-24s and 17s took off before the raid. Ack-ack fire was terrific last night. Doubt its effectiveness though. Cootenac (Marval) got back from hospital this morning. Had measles.

During the war, friendly rivalries formed between different units. First published in June 2014, this lighthearted story describes one of the pranks that arose from the rivalry between the 90th and 43rd Bomb Groups.

In May 1943, the 90th and 43rd Bomb Groups were the only active heavy bomb groups in the Fifth Air Force (though the 380th was getting situated in the theater and would be fully operational by the end of the month), which led to the development of a friendly rivalry. One 90th crew was flying a reconnaissance (recco) mission on the 15th and reported seeing a convoy along the south coast of New Britain. The 43rd’s 65th Squadron sent out several reccos afterwards to prepare for a larger assault, only to discover that this supposed convoy was actually a chain of small islands. Not surprisingly, the 43rd berated the 90th for this mistake, and the 63rd Squadron’s combat diary noted that “the convoy of rocks, reported by the 90th Bombardment Group (H), on 15 May 1943, has now officially been confirmed.”

Gen. George Kenney wrote about the 90th’s response to the 43rd in his memoir General Kenney Reports. “The 90th Bombardment Group board of strategy went into a huddle to see what could be done to restore their own prestige and, if possible, to humiliate the overproud 43rd.” The 90th extended a party invitation to the 43rd, which was readily accepted, especially after hearing the 90th supposedly had some Australian beer in its possession. 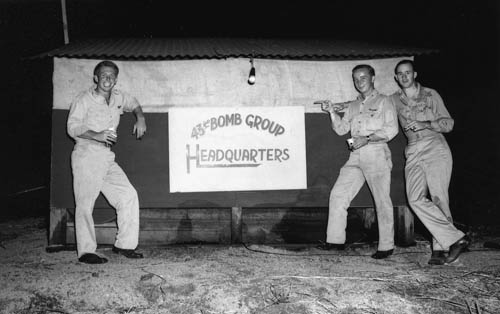 Men from the 90th Bomb Group pose outside the newly renamed latrine.

“That evening,” Kenney continued, “as the procession the the 43rd Group jeeps made the last turn in the winding road leading up the hill on which the 90th Group mess was perched, they were horrified to see just off the road an unmistakable Chic Sale [latrine] with a huge sign on top of it, reading ‘Headquarters 43rd Bombardment Group.’ The Kensmen didn’t say a word about it all evening. They helped their hosts eat an excellent meal and consume all the Australian beer and wound up the festivities by thanking them profusely for a fine party. The next morning just as the 90th was tumbling out of bed, a lone 43rd Group B-17, slipping in over the tops of the trees, suddenly opened fire on the Chic Sale with a pair of fifty-caliber guns shooting nothing but incendiary ammunition. The little building blazed up as the B-17 kept on going until it disappeared behind the hills.” The latrine couldn’t be saved.

While Kenney wasn’t pleased with the Group’s reaction, he only said he expected that sort of behavior to not continue in the future. Yet, he conceded, “little silly things like that, which now sound like a species of insanity, were wonderful incentives to morale and set up a spirit of competition and a desire to outdo the rival organization that meant more hits on the targets, a quicker end to the war, and thereby a saving of American lives.”

Of all the interviews with World War II veterans that we have watched, this might be the first time we have found one who was a radio operator on a B-17.  Watch his compelling interview with WHAS11 below.

Members of the 3rd Bomb Group rang in 1944 a little differently in New Guinea than they would have back in the States. Despite not having friends and family to celebrate with, they still managed to have a good time.

Adrian Bottge of the 89th Squadron noted the evening’s celebration: “New Years night. A lot of the fellows in the 13th – 89th – 8th & Hdqtrs. shot their Garands, tommy guns, 45 pistols, etc. at midnight. Sounded like war and kept me awake for a time.”

Meanwhile, Clifford Taylor of the 13th Squadron wrote: “Tonight we celebrated a New Guinea New Year’s Eve. It wasn’t too bad as somehow the boys ‘racked’ off some steaks & Bill & I had a couple of bottles of port & a fruit cake. We got pretty jolly on the wine & had a good old-fashioned song-fest. After raising hell until pretty late we were ordered on a mission for 5:30 New Year’s morning.”

The next day, Andrew Weigel commented on the results of the previous night’s festivities: “The [8th] squadron was released today. And that was just as well. Most of the men were pretty much the worse for wear after last night…”

We’ve got you covered. Visit our website for ideas.