In 1946, the U.S. War Department released a movie on the bombings of both Hiroshima and Nagasaki. Along with footage of the destruction, there is also an eyewitness account from priest, who was in a building a few miles away from Hiroshima when the first atomic bomb detonated on August 6, 1945.

We are taking a look back at two posts regarding the bombs that were dropped on Hiroshima and Nagasaki in August 1945. Each one features eyewitness accounts from men who saw the mushroom clouds as they were out on their own missions on the 6th and 9th. They are fascinating glimpses into one of the most important historical events of the 20th Century. Click on the names below for the full accounts.

As we rounded the south tip of Kyushu we began to observe a strange looking white cloud over the horizon, but rising higher and higher. At first it resembled a large cumulus cloud, but soon it was apparent that it was not of natural origin. It began to appear in the shape of a huge mushroom, flattening out at the top… —Bud Lawson 8/7/45

Little did any of us, and I presume to speak for my crew, perhaps others as well, know that on this sunny Japanese morning, like eons of mornings before, that we would be witnesses to a slice of epochal history, a personal introduction to the nuclear age… —George B. Green 8/9/45

Today, we bring you reactions from 43rd Bomb Group men that were flying missions near Nagasaki on August 9, 1945. They had no idea they were about to witness a major historical event.

Unfortunately, I didn’t keep very good diary notes for this mission, and must rely alone on memory. There is one view indelibly impressed in mind, but first things first.

As we left Tanega Shima, the rendezvous point, I noticed, perhaps two or three thousand feet above, a flight of three B-29’s flying a westerly course, while we flew north-northeast expecting to continue along Kyushu Island’s east coast and we did.

Little did any of us, and I presume to speak for my crew, perhaps others as well, know that on this sunny Japanese morning, like eons of mornings before, that we would be witnesses to a slice of epochal history, a personal introduction to the nuclear age.

We had just turned landside from the Inland Sea and were on course to the target. I think I had just engaged auto-pilot control for the bombardier, when I looked up and to the west. There, I would have judged about a 100 miles away, was an awesome cloud hanging there in a clear sky. At the time, I didn’t have the foggiest notion what I was looking at, or its exact location (Nagasaki).

It was just one hell of a cloud, not at all, unlike a massive thunderhead; a brilliant, white mushroom cloud soaring 20, 30, perhaps 40 thousand feet into a bright, blue sky. I clearly remember saying to all hands on the intercom, “My God, are they’re giving this place a pounding today!”

But there was a better reason for my spontaneous ad lib, clearly unaware of the dreadful significance of the mushroom cloud. Kyushu Island, perhaps to an altitude of 10,000’, at least along its east coast, was covered with a dirty yellow haze, about the color of LA smog on a bad day. I assumed, and probably rightly, it was a result of intensive strafing and bombing attacks, and apart from the significance of what had happened at Nagasaki of which we were ignorant.

Albeit, we turned back to the Inland Sea and headed east and south-east for home. Soon I had a friendly visitor flying off my left wing; a 20th Air Force, yellow nosed P-47 with a playing card tail symbol, I think the inverted heart, a spade, very likely part of our fighter cover. I guess he was saying “little brother” has been looking after “big brother.” We flew together a few minutes and exchanged waves, but he soon left leaving a lumbering B-24 fast behind.

When we arrived at Ie Shima for landing, it was bedlam. Calling “Moka” tower for landing instructions was almost impossible. Pilot-after-pilot was calling for landing clearance, most all at the time, so all one could hear was a nearly constant “feedback” squeal. Heavy bombers, which would have fuel reserves were ordered to delay landings, giving fuel starved fighters a chance to get back on the ground PDQ; that may have also applied to B-25’s, but I don’t rightly remember. In any case, some fighters (how many I have no idea) ran out of gas and ditched nearby, coolly calling, as they did, for rescue. Obviously, ETA’s for all aircraft had converged inconveniently.
(Note: This mission reconstruction was completed nearly 47 years after the fact.)

8/9/45 Note from Wendell Jones, member of the 64th Bomb Squadron

Robert Cooper’s crew was flying a mission to Honshu Island, Japan when the crew saw the mushroom cloud from the atomic bomb dropped on Nagasaki. I was the upper turret gunner and I happened to be looking in the right direction and at the right time to see some distant low hanging clouds turn reddish, followed by the mushroom cloud. Our navigator, Howard Yeager, said we were about 40 miles away.
At interrogation, they thought we might have been imagining things since three days earlier the “bomb” had been dropped on Hiroshima – but it was real. 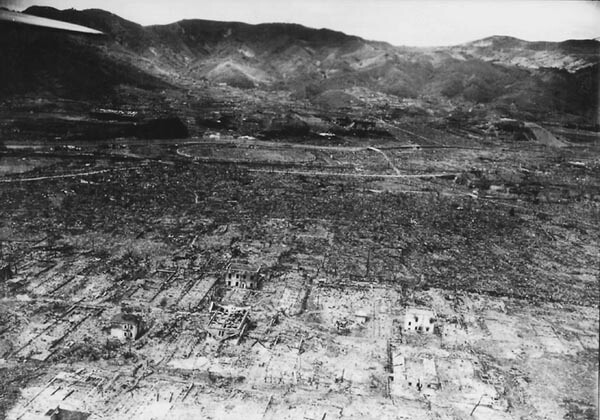 Several days after the bombing of Nagasaki, Major Jack D. Johnson from the 38th Bomb Group flew a group of war correspondents over the devastation. It was unlike anything they could have possibly imagined.

Excerpt from Charles McClenney, member of the 64th Bomb Squadron

I can see it now as I think back that many years ago. The other squadrons were making their run over Tsuiki Airdrome and it would soon be the 64th Squadron’s “dread” moment to fly over the airdrome and see how accurate the Jap ack ack gunners were that day.

The photograph is in my hand. The photograph that I still have shows the excellent hits that the 65th and 403rd squadrons were making, and what is this! The ack ack bursts seem to be made of napalm. They were different. They exploded different. We would have something to report back to intelligence. We are there and it is time to turn and start on the bomb run. Ack ack moderate and inaccurate. We probably wouldn’t have any holes in our airplanes. Bombs away! Blam! Blam! Blam! Good hits. That airdrome will be out of commission for a long time. The new antiaircraft shell did no damage to us.

About this time “Bock’s Car” (B-29 that bombed Nagasaki) with “Fat Man” atomic bomb had failed to drop on Kokura and was headed for the secondary target- Nagasaki. Nobody aboard our aircraft knew anything about the bomb. Nobody knew why we were ordered not to get closer than 50 miles of Kokura, Sasebo, or Nagasaki. We did not believe the “Special Report” coming from Washington DC on August 6, 1945 that one bomb had wiped out an entire city of 200,000 people. I knew this was propaganda to scare the Japanese so they would surrender. Little did I realize, at the time, that my old buddy from East Central State Teachers Collage at ADA, Oklahoma, Freddie Olivi of Chicago was flying co-pilot on “Bock’s Car”. Fred Olivi, Tom Landry (coach of Dallas Cowboys), Benton Love (President of Texas Commerce Bank) and son of Klebergs (owner of the famous King Ranch) along with myself and about 300 aviation cadets had taken our CTD (College Training Detachment) when we met in the summer of 1943 in ADA, Oklahoma. It was a strange set of circumstances that caused mine and Freddie’s paths to cross. Our crew didn’t know it, but we were bombing the Tsuiki Airdrome to keep the fighters off of Bock’s Car” ~ and our paths were getting closer.

“Bock’s Car” had left Kokura and was now heading for Nagasaki. We had dropped our bombs and we were also heading towards Nagasaki and Ie Shima. What happens when the whole world suddenly becomes a fireball. What happens when you think you saw it but you know it can’t be. You can’t be prepared to see an atomic bomb go off. And go off it did- right on top of Nagasaki. Wendell W. Jones our top gunner was the first to say anything ~ “Say- did you guys see that explosion?” Of course- we all saw it but we couldn’t believe it. Now there was much discussion. What was it? Where was it? Did a Jap munitions plant blow up? How long does it take the mushroom cloud to push through the clouds? Ah ha! Something to photograph! And we did! Many pictures you see of that atomic cloud were taken from our airplane. We were lucky and had a photographer on board. We didn’t have the problem that Fred Olivi had that afternoon in “Bock’s Car”. They were about to run out of gas ~ technical problems they couldn’t get back to Tinian where they had come from. They were heading for Okinawa and hoped they could make it. We had plenty of gas and we were headed for Ie Shima.