TIN LIZ was another of the unit’s medium bombers which had been converted to a strafer. Its original crew was F/O (later Capt.) Sylvester K. Vogt, pilot; 2/Lt. John R. Tunze, co-pilot; 1/Lt. Donald W. Ryan, navigator; T/Sgt. Robert E. Casty, radio-gunner; and S/Sgt. Joseph Forman, turret gunner. Casty remained with the 501st until early 1945, completing 104 combat missions, more than any other man in the Squadron. T/Sgt. Gerald E. Sims, the crew chief, was responsible for maintenance on the aircraft.

The profile illustrates TIN LIZ as it appeared in late September 1943, after fifteen missions. The original white nose I.D. band and an insignia depicting a grasshopper driving a falling bomb were partially obscured by the new blast panel, which was painted black on many 501st Squadron aircraft. The grasshopper was driving a bomb which had a red lightening bolt zig-zagging down it. The vertical white tail stripe dates from just after the strafer modification and was carried by all Squadron aircraft. Dead-eye Sy appeared just below the pilot’s window. The dark green patches on the vertical stabilizer and wings (not shown) were field applied to many 345th aircraft about the time of the strafer modification. 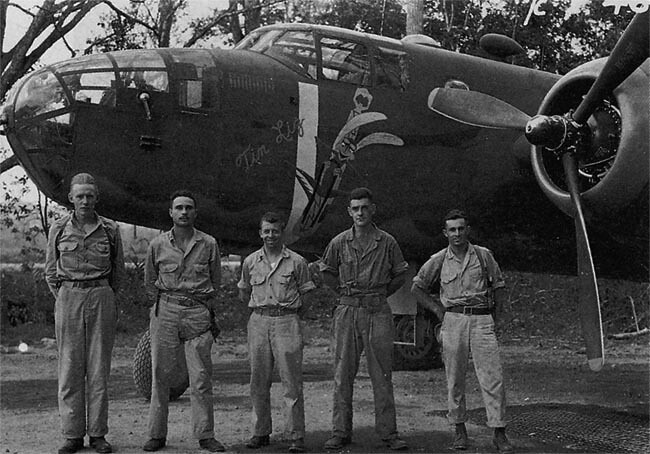 The insert profile shows this same aircraft as it appeared about May 1944. An entirely new version of the grasshopper insignia has been applied as well as bomb stencils indicating that 85 missions had been completed. The three Japanese fighter silhouettes refer to confirmed kills by turret gunners in 1943. These were a “Zeke” on 10/18 (Flynn), another on 11/15 (Forman), and a third on 12/22 (Forman). Beneath the top turret are displayed two Japanese rising sun flags referring to Forman’s two kills. The sinking ship silhouette in white was for a Japanese ship destroyed by the crew.

Another interesting note was the V -shaped area of darker camouflage paint just below the top turret. This was caused by a protective tarp which was secured over the turret dome when the plane was on the ground. The camouflage paint gradually faded from the sun, but the area under the tarp faded much less, creating the effect shown.

TIN LIZ met its end on May 21, 1944, when it was shot down by AA near Dagua Airstrip, New Guinea, killing the entire crew. Details can be found in Appendix I.

View the color profile on page 214 of our book Warpath Across the Pacific.