To the newly-arrived American airmen, Australia was a completely different world. Sailing across the Pacific on the USAT Ancon, the 3rd Bomb Group went up the Brisbane River in February 1942 and disembarked at Hamilton Wharf. When the men were allowed to explore their new surroundings, they were warmly greeted by the Australians. Still, changes in climate, currency, popular sports, and general culture were a lot to get used to in a short time. Some of the men tried to learn about cricket and rugby but neither sport really caught on with the Group. Twelve days after the 3rd reached Australia, it was ordered to head north to the small town of Charters Towers by March 7th.

On March 8th, the 3rd got on trains and began a slow journey northward. Two days later, the 89th Squadron got off at Townsville to fulfill an assignment of servicing 40th Reconnaissance Squadron B-17s. The rest of the Group rode the remaining 70 miles to Charters Towers. Upon arrival, the men were taken to their campsite, which was nothing more than tall grass and a few trees. They spent their first night in Charters Towers under the stars. The next day, they began to put their camp area together. Not long after the camp was set up, the men pitched in to work on the new airstrips.

Soon, they were given permission to go into the town itself and have a look around. For them, it was like stepping into an old Western film, complete with wooden sidewalks and bars with swinging doors. Charters Towers was certainly small, but it thrived due to its proximity to gold mines. With plans to set up a major air base, though, Charters Towers wouldn’t remain a small town for much longer. 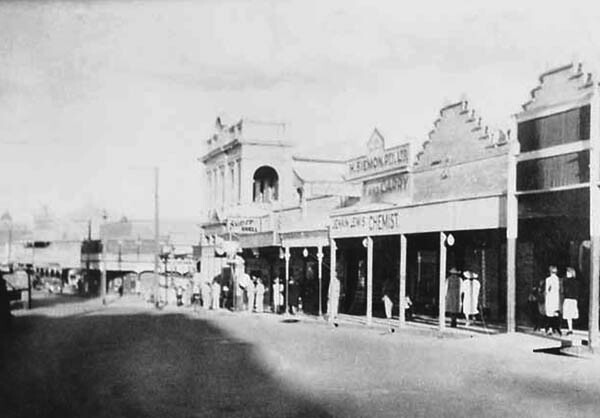 A photograph of the Main Street in Charters Towers during the summer of 1942. Although only a small town, Charters Towers had prospered from a gold mining boom and was well-appointed for a frontier outpost. The town underwent a rapid expansion as it became a major airbase and thoroughfare for the Allied war effort. (Harry Mangan Collection)

By June 1942, the 3rd Bomb Group was well-established in Australia. The men were flying more bombing and gunnery training missions, and their current space at the RAAF bombing range in Townsville was quickly becoming insufficient for their needs. The men searched for a new space that they could use for a range. Harold Chapman, a Charters Towers rancher, gave permission to the Group to use part of his cattle station for their practice. Chapman requested a day’s notice from the men whenever they needed to use the range. In turn, Chapman would round up his cattle so that they wouldn’t get shot.

The Group would always send a few men to help Chapman round up his cattle. Private Charles Valade of the 13th Squadron soon developed a reputation as quite a cowhand. During one unfortunate training mission, “Pappy” Gunn reportedly shot and killed a cow by accident with .50-caliber ammo. He had to paid Chapman five pounds as a reimbursement. For the most part, using Chapman’s range for training proved to be extremely valuable for the combat crews.