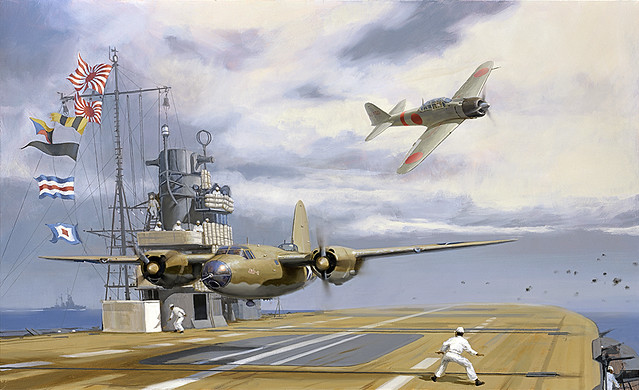 Early on the morning of June 4, 1942, the Japanese Combined Fleet, with four aircraft carriers, was approaching Midway Island in the Central Pacific with the intention of seizing the island. They expected to surprise the Allied base, but due to a broken Japanese code the Allies had advance warning, and sent every available bomber in Hawaii to Midway’s defense. Among this eclectic mix were four B-26 Martin Marauder fast medium bombers, now equipped to carry aerial torpedoes: two from the 22nd Bomb Group and two from the 38th Bomb Group. Navy ships, including two carriers, were also now approaching the scene. But even without the element of surprise, the Japanese had more ships, more carriers, and more aircraft armed to take down opposing ships.

While Midway Island was subjected to a terrific pounding by an initial Japanese air attack, the B-26s participated with Midway-based Navy attack aircraft in a desperate but spirited counterattack on the carriers. The strike ended badly for this American strike force and two of the B-26s were shot down during their target runs. The other two were so badly shot up that they barely made it back to Midway, where they crash-landed and never flew again. While attempting to evade the Akagi’s Zero fighters after releasing his torpedo at the ship, Lt. James Muri of the 408th Bomb Squadron, 22nd Bomb Group, in B-26 #40-1391 SUZIE Q, ended up flying just feet above the Akagi’s flight deck. Vice Admiral Chuichi Nagumo, leader of the Midway assault, witnessed the American counterattack, saw the Marauder fly a few feet above the ship’s deck, and incorrectly surmised that the planes stationed on the island’s airbase were the biggest threat to his precious carriers. Accordingly, he re-armed his force of attack aircraft with ordnance intended to destroy land targets. What Nagumo didn’t realize was that at the moment that Lt. Muri was hurtling down the flight deck of Akagi, mere feet away, two yet undetected U.S. carriers had arrived to engage the Japanese fleet.

The shocking discovery a short time later of U.S. carriers preparing to strike the Japanese fleet forced Nagumo to once again download the ordnance on his waiting planes and reload them for attacking ships. Aside from the breaking of the Japanese code that allowed the U.S. Navy to respond to the Japanese invasion fleet, this fateful decision was responsible, more than anything else, for the U.S. Navy’s stunning victory over the Japanese Naval forces in the Battle of Midway. While the Japanese planes were sitting on the flight decks, busy reloading, the Americans had already launched their attack aircraft. Had the Midway-based attack not been so aggressive, or if Lt. Muri had not so audaciously buzzed the Admiral’s flagship, the Japanese attack aircraft may well have kept their anti-ship ordnance and been in the air when the American carrier attack planes were launched. By the end of the day, all four of the Japanese carriers had been sunk; the USS Yorktown was the only carrier loss suffered by the United States Navy in this battle, which was the turning point in the Pacific war.

If you want to learn more about the Battle of Midway, read this post. Head to our website to buy the painting.

8 thoughts on “Marauder at Midway”