Balikpapan. A Japanese stronghold in the earlier part of the Pacific war. At the time, it was heavily defended by some of Japan’s best pilots, and the Allies hoped to change that soon. General George C. Kenney in particular felt that if Fifth Air Force was to destroy the oil refineries on the island, it would be a huge setback in Japan’s attempt to hold onto its position in the southwest Pacific. Over the summer, Kenney directed the 380th Bomb Group to bomb several refineries in the area, with little success, though they were a factor in some fuel shortages. By September, he was eager to send his forces back to Balikpapan. There were a few missions flown by the Thirteenth Air Force and the 90th Bomb Group, however, approximately 40% of the planes flown on these mission were either lost or too damaged to be put back in service afterwards.

Due to the heavy losses suffered by the Thirteenth during these raids, plans were changed. Kenney soon gathered together reinforcements for what would be the largest raid yet for the Fifth and Thirteenth Air Forces. Among the 22nd Bomb Group crews participating was one from the 33rd Squadron in the B-24 named Liberty Belle, which was flown by 1/Lt. Joseph C. Tafaro. On October 10, 1944, his crew lifted off in the early morning hours with the other 22nd Bomb Group planes and headed for Balikpapan.

Once they neared the area, they were met with phosphorus bombs and aggressive fighters. Tafaro’s crew managed to fight off two Zeros that had singled out LIBERTY BELLE. Unfortunately, one of the two Zeros that they shot flew into the B-24 flown by 1/Lt. Clarey. The B-24’s right wing broke off and both planes plummeted from the sky. No one survived. About two minutes away from the target, LIBERTY BELLE was hit by a 20mm shell in the #2 engine. With Japanese fighters still hovering, Tafaro decided against feathering the engine so that they wouldn’t become more vulnerable to the enemy. It is not known if the tactic fooled anyone at the time. 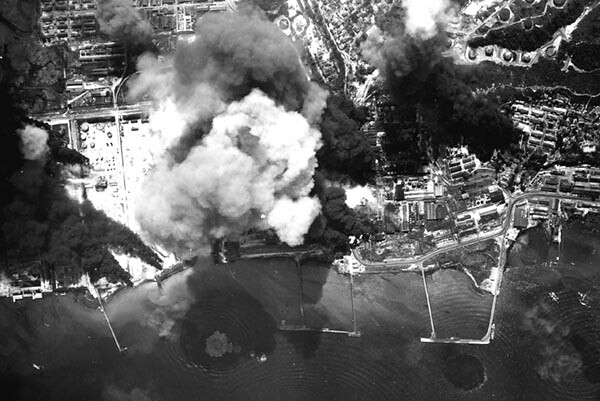 Balikpapan after the 22nd dropped their bombs on the target area.

Tafaro made his runs on the target, then left as quickly as possible, with Japanese fighters in hot pursuit. By this time, it was obvious that LIBERTY BELLE was damaged and it soon became the target of three Zeros. The B-24 was hit several more times, including the #3 main gas tank. Throughout this time, the plane’s flank was protected by another B-24 flown by Lt. Sewell. Reflecting on the incident, Tafaro didn’t think he would have made it if it hadn’t been for Sewell sticking by. LIBERTY BELLE was chased by the fighters for about 180 miles before they turned around and left the B-24 to its fate.

With little fuel remaining, Tafaro knew his plane wouldn’t make it back home. He and his navigator picked out a landing spot on Batoedaka Island, not too far from the location of the PBY Catalina standing by. The landing was challenging, but successful. Crewmembers tumbled out after the plane came to a stop, then checked for injuries. Amazingly, the only one wounded was the pilot himself, who ended up with head lacerations. Tafaro and his crew spent the night in the plane, then set off the next morning. They encountered friendly natives who took them to their village, where they were fed and housed for the night.

The next day, the men saw a P-38 flying low overhead. They fired a flare, which was spotted by the P-38 pilot and acknowledged with a low pass, waggling wings, and a wave at the crew. It wasn’t until the following day, October 12th, that two P-38s escorting a Catalina appeared overhead. After the men thanked the natives, they were rowed out to the waiting Catalina that took them to Morotai. A C-47 took them back to Owi the next day. To show their thanks to the natives, Tafaro and his crew arranged for seeds, clothing materials and tools to be sent to their rescuers.