Weather was interfering with Fifth Air Force’s plans in October 1943, specifically on October 16th. Instead of targeting Rabaul, the 345th Bomb Group was sent to hit the Wewak airfield complex instead after finding out that the Japanese were rebuilding their air power there. All four squadrons as well as a squadron of fighter cover were to first attack Boram Airstrip, then fly the two miles to Wewak where their main strike would occur. Four of the Group’s B-25s were unable to complete the mission for various reasons, including one unusual occurrence: a turret canopy broke and fell off.

The Japanese were ready for the 345th, filling the sky with antiaircraft fire and fighter aircraft prepared to attack their enemy. Separating into squadron formations, one flew off to release parafrags over the antiaircraft batteries dotting the shoreline. Once over the runways of Wewak, ten B-25s dropped 100-pound wire-wrapped bombs in hopes of destroying the runway, aircraft on the ground, supply dumps and more. Meanwhile, the Japanese were fiercely fighting back and some of their bullets were hitting crucial points of the B-25s. BOOM-BOOM’s nose guns were knocked out of action when the electrical connections were severed, and it received several other hits that took it out of the 500th Squadron for several weeks upon return to Port Moresby.

One B-25, #561, had fallen behind the rest of the 500th Squadron’s formation with a damaged engine. Aboard the aircraft, Lt. Donald Stookey was doing his best to keep his plane in the air. With one engine out of commission and the other losing power, it wasn’t long before he had to make a water landing ten miles down the coastline and three miles off Cape Moem. The crew escaped their B-25 and swam for the raft that they ejected before the crash. Overhead, three B-25s from the 501st Squadron and several P-38s circled the downed crew, dropping two more rafts before their fuel began to run low and they had to head home. Stookey and his crew rowed toward land, where they were eventually captured and killed by the Japanese. 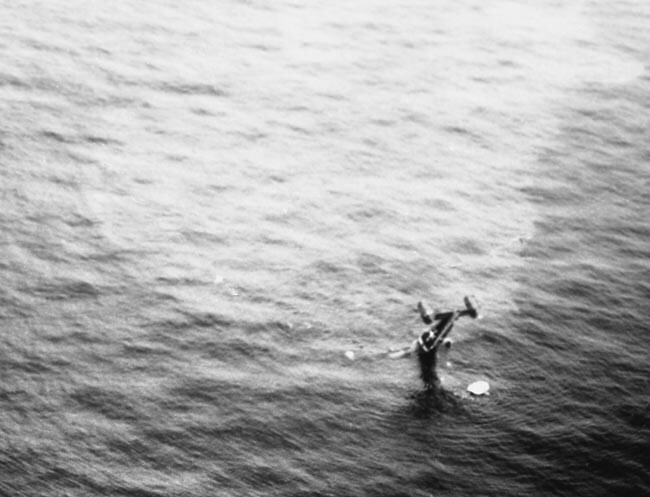 B-25D-1 #561 of the 500th Squadron was hit in the right engine by intense AA fire a mile from Wewak on October 16, 1943. Lieutenant Donald Stookey made an excellent water landing three miles northeast of Cape Moem. The plane remained afloat for only 90 seconds. This photo was taken from a 499th Squadron aircraft just after the tail lifted and a few moments before the plane sank. This nose-down attitude was typical of ditched B-25s. The crew was later captured and all died in captivity at Wewak and Rabaul.

Back over Wewak and Boram, two B-25 pilots discovered their own unpleasant surprises when their bombs wouldn’t release because the bomb racks malfunctioned. Leaving the bombing to the other B-25s, they strafed the target area instead. STINGEROO sustained damage from bullets through the hydraulic system and gas tanks, which made for a tense flight home. The pilot made an overnight stop at Nadzab to get the damage repaired before heading back to Port Moresby. After doing extensive damage to the two airfields, the remaining 345th aircraft formed up and headed home.

Overall, the mission was deemed a success. Photography taken from the B-25s cameras helped determine 25 confirmed aircraft destroyed on the ground or in the air, with another seven probable. While a break would have been welcome news, the 345th would be back in the air on the 18th, heading for the dreaded stronghold of Rabaul.

Find this story in our book Warpath Across the Pacific.