Going back through the archives, we rediscovered a post from January 2015 about an unexpected discovery one crew made when the men returned to base after a mission. Read on for the rest of the story.

The last mission for YE OLD NANCE, a 38th Bomb Group B-25, was supposed to be a milk run. The bomber, flown by Capt. Bud Thompson and his crew, attacked Malahang Drome, Lae on January 21, 1943. As bombardier 1/Lt. Walter G. Beck dropped his bombs, he and the rest of the crew heard the B-25 rattle violently. They thought they had been hit by antiaircraft fire, but none of the instruments showed that anything was amiss. With that, the crew headed home.

Sgt. Robert Pickard picks up the rest of the story in his diary:

“Day before yesterday we had quite a bit of excitement most of which happened while I was asleep…736 [YE OLD NANCE] carrying one 300 lb. demo bomb in the bomb bay, arming wires loose and all ready to go off. It taxied into the revetment about 75 feet from our tent. Then a gas truck pulled up and started filling it up with gas. About that time Lt. Beck, Bombardier, saw the live bomb and told everyone to clear out, that it would go off in 45 seconds. So everybody left, but fast. The guy who was putting gas in the plane just dropped the hose and left. The gas ran all over the plane and down on the ground and over to a fire where they were boiling clothes. Poof – and the whole plane was in flames. 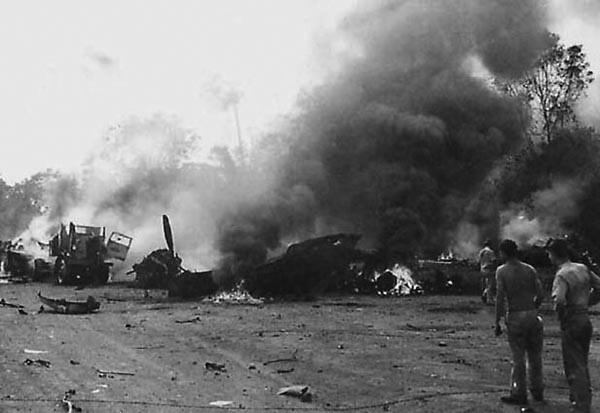 Men look at the burning wreckage of YE OLD NANCE.

About that time – Kudelka woke up and took off in such a hurry that he hit the tent pole and darn near broke his skull, but didn’t bother to take time enough to holler at me. Pretty soon the ammunition in the plane started going off, and singing around…and that is what woke me. I lay for a full minute trying to figure out what it was, and then rolled over and saw the plane a mass of flames. Still did not quite realize what the score was. Looked around and didn’t see another soul around a usually busy place so figured I had better move out. I dressed and ambled over toward a slit trench. Heard a particularly close bullet whiz by so jumped in the trench. No sooner did I get in it than the bomb exploded along with a 2000 gal tank truck full of 100 octane gas, which was sitting in front of the plane. Parts of the plane were found 200 yards away. Our tent had several holes punched in it and other tents in the area were completely burned up. The concussion from the explosion was terrific. I was closer to it than any one else. The pay off is this – Kudelka came back yelling his head off to Jim Eshleman for not waking him up – that he might have been killed and etc. [He] kept carrying on something fierce. I asked him why he didn’t wake me up and he didn’t say any more.”

Incredibly, no one was injured by the explosion. The B-25, on the other hand, was a total loss.

9 thoughts on “Repost: One Last Bomb”