In the very early hours of June 30, 1943, a mix of heavy bombers from the 43rd, 90th and 380th Bomb Groups took off for a raid on Vunakanau Airdrome. The plan was to approach the target from 18,000 feet to avoid any Japanese night fighters, then make their runs between 9000 and 17,000 feet. For the most part, the stratification also provided extra protection from the antiaircraft gunners. Only the 403rd Squadron reported damage from antiaircraft fire, which hit the B-17 nicknamed STUD DUCK. 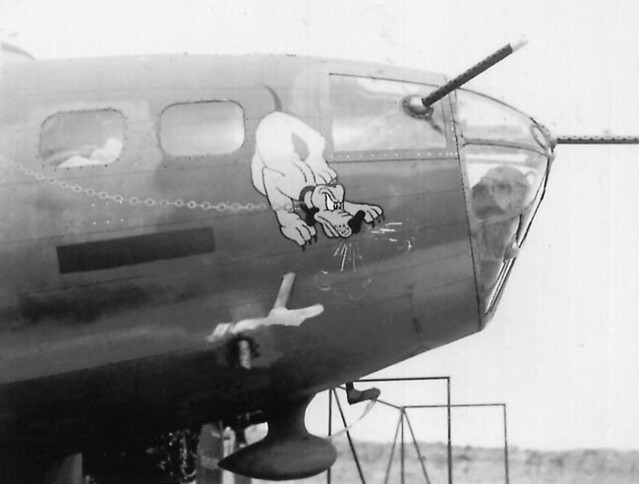 B-17F #41-24543, PLUTO II, was the last B-17 to go down from the guns of an Irving night fighter over Rabaul. The bomber saw service initially with the 403rd Squadron before being transferred to the 53rd sometime in early February 1943, where it acquired its nose art. The solid stripe of paint at left was applied to cover up the bomber’s previous name, I DOOD IT. (Charles R. Woods Collection)

Back at Seven Mile, the men were worrying over the disappearance of the crew of PLUTO II. None of the American crews saw the B-17 get shot down. Captain Charles L. Anderson flew over the Owen Stanleys on a five hour search for the missing crew, and returned without any new information. It wasn’t until 1946 when the B-17’s wreckage was discovered at Madres Plantation on New Britain. Remains were subsequently recovered and investigators determined that the entire crew died in the crash.

Read more about the early part of the 43rd Bomb Group’s history in Ken’s Men Against the Empire, Vol. I.

7 thoughts on “Loss of PLUTO II”