Douglas Aircraft delivered this A-20 to the AAF on October 4, 1943. The 387th Squadron acquired this plane from the 673rd Squadron, 417th Bomb Group, on March 20, 1944, and it was assigned to Capt. Frank P. Smart, the Squadron Commander. His regular gunner was T/Sgt. Michael Music, and his crew chief was S/Sgt. Charles S. Bidek. The latter was assisted by Sgt. Donald M. Cooper.

Smart nicknamed the plane THE TEXAN, and had the flag of his home state emblazoned on the fuselage beneath the cockpit. The nickname was preceded by several colored stars shooting out of the sky. Stenciled in white in three lines above the nickname was: PILOT — CAPT. F.P. Smart, C.C. T/SGT C.S. Bidek and ASST.C.C. SGT D.M. Cooper. The plane letter “S,” after Smart’s last name, was carried on both sides of the rudder, and the Squadron’s diamond playing card emblem appeared on the lower rear fuselage. The plane did not have the horizontal white tail stripe that later identified the Group’s A-20s. The profile depicts the aircraft as it appeared at the end of March 1944. 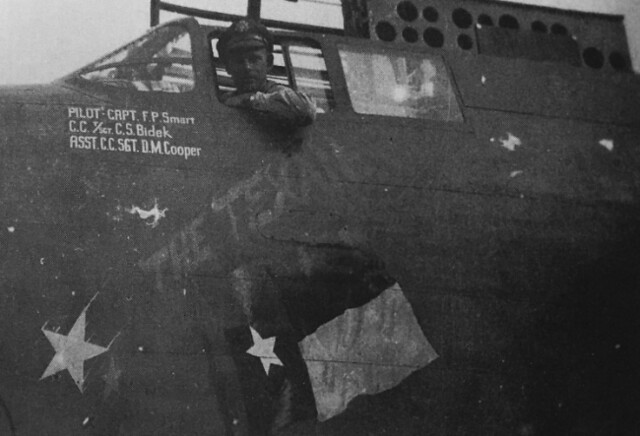 Captain Frank P. Smart, 387th Squadron C.O., can be seen here in the cockpit of his aircraft, THE TEXAN. Returning from the “Black Sunday” mission to Hollandia on April 16, 1944, Smart ran out of fuel and ditched 30 miles west of Saidor. That was the last time anyone saw Smart and his gunner, T/Sgt. Michael Music. (Edgar R. Bistika Collection)

The A-20 had been with the 387th less than a month when Capt. Smart ditched it in the ocean 30 miles west of Saidor, New Guinea, on the April 16, 1944 “Black Sunday” mission. The plane ran out of fuel on the return flight from an attack on Hollandia, New Guinea, after it encountered severe weather. Although crews from circling planes spotted Smart and Music inside a life raft, the men were never heard from again.

Today, THE TEXAN lies beneath 60 feet of water about one quarter-mile offshore from Nom Plantation, known as Yalau Plantation during the war.

Read more about this and the other profile aircraft in Rampage of the Roarin’ 20’s.

7 thoughts on “The Texan”