Less than a month after the 43rd Bomb Group began setting up camp at their new home of Tacloban, the Japanese were trying to figure out a proper welcome to the area. Lieutenant Colonel James T. Pettus received a phone call on December 6, 1944 alerting him of a parachute attack on Tacloban and Dulag planned for that night. Japanese paratroopers had already landed at Buri and San Pablo airbases in hopes of capturing V Bomber Command and Fifth Air Force headquarters. Units from every military branch on Tacloban quickly organized to defend the airbase. Antiaircraft guns and searchlights were manned, and aircraft with functioning turrets were towed over to be used as additional firepower. Once the preparations were made, all that was left to do was wait for night to fall.

F6F night fighters patrolled over the airbase for awhile, but they did not encounter any enemy aircraft. A Navy B-24 privateer landed, then the nose gear collapsed and the plane had to be towed off the runway by Captain Roland T. Fisher, who hooked it up to a cletrac (Cleveland tractor) and towed it to the beach. Fisher was in charge of keeping the runway clear. Shortly thereafter, he turned on the runway lights for the F6Fs that were landing soon. The lights turned off right after the first one landed, which was not an unusual occurrence. Wires from the lights were bunched up next to the strip and were easily crushed when landing aircraft ran over the cords. Fisher jumped out of his jeep, which was doubling as his command post, and twisted the wires back together.

Coming in next was another aircraft with its landing lights on, although this one, an antiaircraft gunner noticed, had exhaust flames coming out of the top of its engine nacelles instead of the bottom. It was a Ki-57-II “Topsy” transport. The pilot was certainly sneaky to slide right into the F6F landing pattern, but his cover was very quickly spoiled. That antiaircraft gunner had his sights set on the Topsy and began shooting at it as the pilot made a final approach. By this point, Fisher had taken cover behind the cletrac. The Topsy burst into flames, flew over the gun battery and plowed down the beach where Fisher had taken cover. He jumped in the ocean. 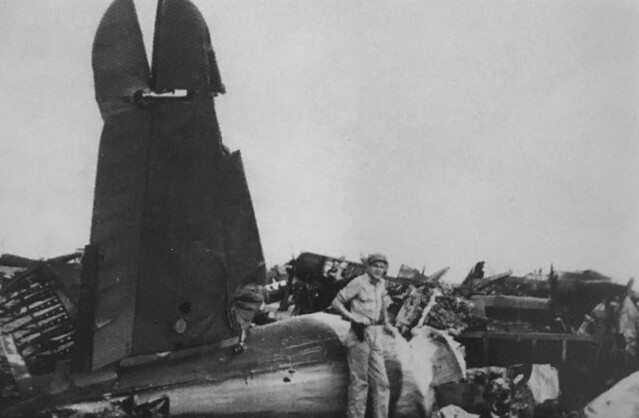 The 63rd Squadron’s Capt. Roland T. Fisher stands for a photograph with the wreckage of the Ki-57-II “Topsy” transport that nearly killed him. (James T. Pettus, Jr. Collection)

The Topsy crashed among a dozen Marine Corsairs, bounced, hit more planes, a grader and finally the cletrac Fisher used earlier. A trail of fire followed the burning aircraft, with Japanese and American ammunition cooking off as the fire intensified. Fisher began running up the beach to the crash site then, “Right in front of me a man, his clothes on fire, ran toward me howling and pulling a gun from his holster. I knocked him down or pushed him and grabbed the gun from him…He thrashed around. I think I hit or pushed him again. Then I backed away again to the water because my own clothes were hot from the fire. He never got up again…I lucked out. My burns were minor…I think what saved me from serious burns was my jumping in the surf just before he hit and being all wet when I struggled with him. I think he was the pilot and didn’t have the murderous equipment the troopers had. Whatever, whoever, I was lucky and he wasn’t.”

Almost three months to the day prior to this incident, Capt. Fisher had brought his B-24 back to base after it was rammed by a Japanese fighter. Both times, he managed to escape serious injury or death.

Around the same time the men on Tacloban were dealing with the Topsy, a second Japanese transport plane had crashed, this one in San Pedro Bay after it was shot down by the Navy. Just as before, there was only one survivor. This one was in much better shape and he was apprehended by the Allies. The officer gave his enemies plenty of information about the mission, none of which was passed along until a more appropriate time.

This story can be found in our book Ken’s Men Against the Empire, Volume II.