One of the biggest elements that kept a bomb group running smoothly during World War II was the ground crews. Men who did their best to keep airplanes in good condition, even in a climate where it was difficult to do so. Men who took care of mission logistics, making sure that the airplanes were loaded with the appropriate explosives for a mission, that parachutes were in working order, communications were set up properly and so much more.

Glen C. Brown of the 386th Squadron, 312th Bomb Group was on the line one day with the rest of his ground crew when they heard explosions. Brown, who was a member of the 386th’s Armament Section, typically loaded bombs onto the A-20s and maintained the machine guns. While he had the others were working, a batch of Japanese planes attacked the airfield. “…we decided, unanimously, that there were more interesting places to be than around an aircraft, so we left abruptly!”

The 312th aircrews truly appreciated all the time and effort put in by their ground crews, recognizing the long hours they worked to keep up with the mission activity. Crew chiefs cared about their airplanes, even taking it personally if one of his A-20s didn’t return after a mission. As pilots rotated out of a squadron, crew chiefs often wondered about the type of person who would be flying his plane next, and whether or not the new pilot would treat it well. Because ground crewmen never fought in combat directly, they were never credited with combat time, and so served much longer tours of duty than their aircrews even though they were just as vital to the combat mission’s success. 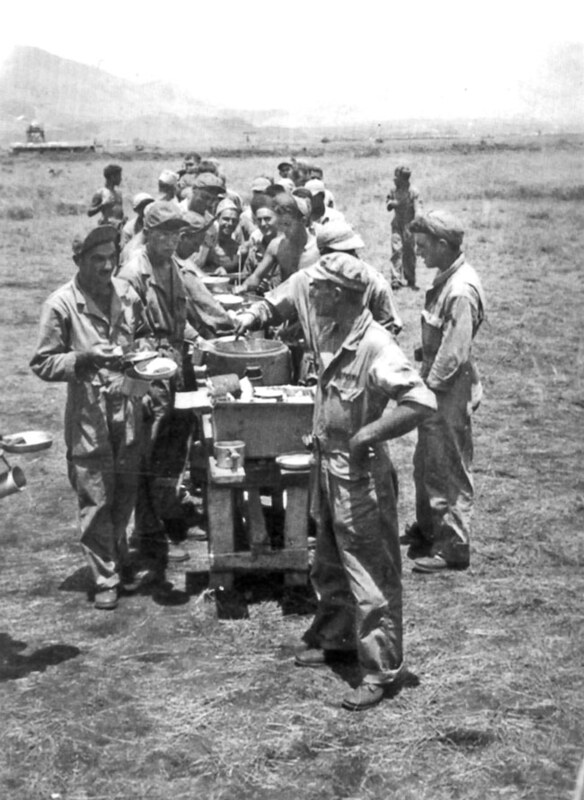 Keeping the 312th Bomb Group A-20s mission-ready was hard work and frequently required long hours on the flight line for maintenance crews. To ensure that aircraft were always ready, it was often necessary to feed these work crews at the airfield. Here, maintenance men from the 387th Squadron have chow at the flight line. (Jack W. Klein Collection)

These men put in long hours in the tropical sunshine, dust, rain or mud, and the climate provided its own set of issues to deal with. Moisture often worked its way into the electrical systems by way of large electrical plugs that connected the wing and fuselage circuits, which could short-circuit the cockpit instruments. Wet plugs drove them crazy until someone had the idea to use hot air blowers to dry them out.

Cylinder heads would overheat, causing the studs that attached the exhaust ports to the cylinder heads to crystallize and break. If that happened, men spent hours removing and replacing the entire cylinder head because they couldn’t remove the remaining studs. Bushings were also replaced regularly because vibrations and heat wore them out very quickly.

It wasn’t always easy to replace parts on an airplane because there weren’t enough new materials coming in from the States. In March 1944, it was so bad that leaders in the 386th Squadron estimated that potentially 80% of the Squadron’s supply needs had not been met. Ground crews salvaged a lot of materials from wrecked or retired planes to keep their A-20s in the air, and that paid off. Average aircraft operability rates hovered around 85% since the beginning of combat operations, an excellent record for the ground crews.

Read more about the 312th Bomb Group in Rampage of the Roarin’ 20’s.

8 thoughts on “Life in the Ground Crew”