First published on our blog in 2015, this story will appear in Ken’s Men Against the Empire, Vol. II.

Throughout World War II, the subject of food was regularly brought up, usually because it was so terrible and the occasional good meal was worth writing home about. While the 43rd Bomb Group was staying in Port Moresby, they put up with field rations that included canned mutton, powdered eggs and “corn willy,” which was Aussie slang for canned corn beef.

Obviously, visits to the mess hall left much to be desired. There was one chef in the 403rd Bomb Squadron who decided to have a little fun with the menus each day and began writing up items such as “Spam ala King,” “Spam Peking,” “Sweet and Sour Spam,” etc. One day, he ran out of ideas and wrote “Just Plain Ole Hairy Spam.” We do not know if scenes similar to Monty Python’s Spam skit played out in the mess hall.

The men grew tired of the bad-tasting, nutritionally-deficient food they had to eat every day and it also lowered their morale. Before long, unit mess officers started up programs to ferry fresh food from northern Australia. Men would contribute money to a fund that would go towards purchasing fruit and vegetables as well as fresh meat, dairy and eggs. Planes typically used for these trips had been designated as war-weary and removed from combat service. They were often known as “fat cats,” possibly adopted from an early 3rd Bomb Group B-25 called Fat Cat that was repurposed as a ferrying aircraft in late June 1943.

Unlike most trips, the plane returning from Australia this time was a brand new radar-equipped B-24 carrying supplies and fresh food such as a side of beef, watermelons and cases of eggs. As the plane touched down at Seven Mile Airdrome, the left tire blew out, causing the B-24 to swerve to the left. Pilot F/O Clarence Molder did his best to straighten out the landing by applying the right break and increasing the power to the left outboard engine, but to no avail. It finally came to a stop in a ditch, with the nose twisting and the outboard props being torn away. Luckily, the aircraft did not catch fire. 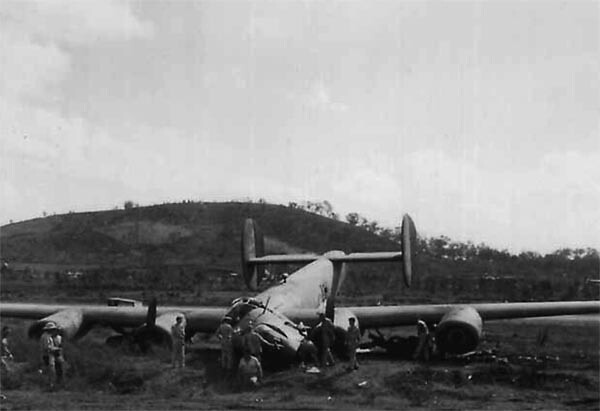 The B-24 after it stopped in the ditch.

Before the landing went awry, radio operator T/Sgt. Charles G. Meinke had been sitting on the floor with one foot on a case of eggs. After the crash, he feared he was injured and bleeding when his foot was forced through the case and he felt liquid in his shoe. It turned out that he was not seriously injured, but the eggs had broken and the yolks had seeped into his shoe.

Second Lieutenant John P. Harmon scrambled out of the plane and noticed fuel leaking from a ruptured wing tank and another stream that was running onto a hot turbocharger. The turbocharger was so hot that it vaporized the gas as it poured down. Harmon ran for the fire extinguisher to cool down the turbocharger, then took the emergency axe to rescue his crew members still trapped inside.

Several of the other men finally got out through the plane’s windshield and helped Harmon until crash trucks and ambulance crews arrived. To the joy of the onlookers that had gathered, they soon freed the rest of the crew. As happy as the men were to see the crew make it out alive, a 501st Squadron Adjutant was upset to see his large purchase of fresh food littering the runway.

29 thoughts on “Repost: No More Spam”