Early on June 26, 1943, 13 planes from the 65th and 403rd Squadrons were sent on a night mission to bomb Vunakanau. Aircrews saw several explosions and fires as a result of their strike and considered their mission successful. It wasn’t until they returned to base that they discovered they were short two B-17 crews, one from each squadron. Both of the B-17s, TAXPAYER’S PRIDE and NAUGHTY BUT NICE, had been shot down by a night fighter piloted by SFPO Shigetoshi Kudo.

That night, on the way to Vunakanau, 1/Lt. Donald D. McEachran was the pilot aboard TAXPAYER’S PRIDE. He reminded his crew that there could be night fighters patrolling the skies over Rabaul and to keep an eye out for them as best as possible. After dropping their bombs without incident, they turned toward home. It wasn’t long before waist gunner Cpl. Joel W. Griffin spotted a plane near the tail and reported the sighting to McEachran. Shortly afterwards, TAXPAYER’S PRIDE was under attack by Kudo. Griffin heard what sounded like gravel being thrown against the fuselage, but was actually shell fragments from 20mm cannon rounds. A wing was set on fire, which was brought under control a few minutes later.

The B-17 then went into an uncontrollable dive. Griffin couldn’t make contact with the cockpit, so he decided it was time to bail out. After he jumped out of the aircraft, he looked for other parachutes and saw none. TAXPAYER’S PRIDE crash into the jungle, presumably killing the rest of the crew. As Griffin continued his descent, his chute got snagged in the branches of the tall trees. He managed to unbuckle himself and work his way to the ground, walked several hundred yards away from the parachute, then settled down and fell asleep. 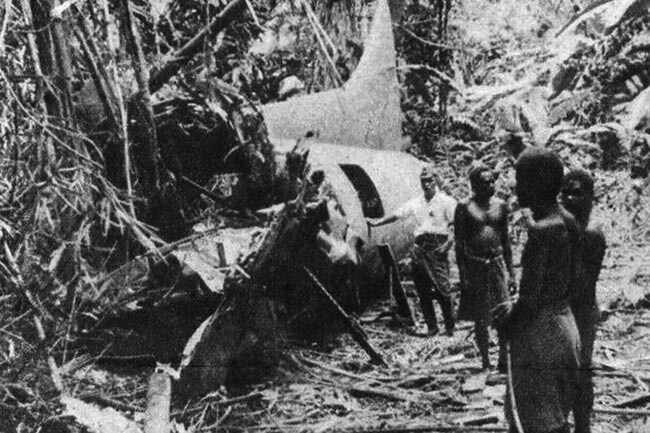 Piloting an Irving night fighter, Petty Officer Shigetoshi Kudo shot down B-17F #41-24448, TAXPAYER’S PRIDE, over New Britain on the same night he shot down NAUGHTY BUT NICE. Japanese army personnel were soon guided to the crash site by local natives and investigated the wreckage of the plane. Photographs of the smashed bomber, seen here, were soon published in the Japanese magazine Ashaigraph. The only survivor of the B-17, Cpl. Joel W. Griffin, was taken prisoner and sent to Japan, where he survived until the end of the war. (Justin Taylan Collection)

When he woke up, he checked himself over and discovered a couple of head wounds as well as an injured ankle that could still take a little weight on it. Limping into a clearing, he was found by some local residents, one of whom spoke English and asked if he was an American. At that point, he knew he would be turned over to the Japanese. After he was captured, he was taken by car to an Army hospital, where Japanese soldiers tortured Griffin by aggravating his injuries. Then a nurse stitched up his head without cleaning out his wounds.

He was interrogated in Japanese and beaten when he didn’t understand their questions and responded with his name, rank and serial number. So he started making up a story. Each day he was interrogated, he made up a story, leading to shorter interrogations that were no less painful than the first. After several days, he was transferred to Rabaul, where he shared a cell with seven other POWs. That number soon increased by one when Lt. Jose Holguin, the only survivor from NAUGHTY BUT NICE, was brought in. The men were prohibited from speaking to each other, survived on meager rations and were not given medical treatment. They were put to work building bomb shelters out of coconut trees, but could not use these shelters during air raids.

On November 13th, Griffin and eight other POWs were put on a hospital ship headed for Japan. Also in this group was Maj. Williston M. Cox, whose B-25 was shot down in August. They were sent to Omori Prison Camp, and Griffin was officially declared a prisoner of war. While the prisoners were fed better than when they were in Rabaul, the camp was infested with lice, among other things. He was put to work at a rail yard, where he loaded and unloaded train cars. There, he befriended Otis Black, who had survived the Bataan Death March.

At the rail yards, it was possible to divert some of the food from its intended destination to their bellies. Between Black, a Navy electrician and a few others, they managed to steal an electric iron, rice, copper plates and insulators, and a bucket. This contraption became a rice cooker that could make about a gallon and a half of rice in 30 minutes. It was so powerful that the camp’s lights would dim anytime they turned it on. Soon, they started trading rice with other prisoners for items from the Red Cross packages. This kept up through the end of the war.

As combat operations ceased in August 1945, the prisoners noticed more U.S. planes flying in the direction of Tokyo. They were not informed of the cessation by the Japanese. This may have also given some prisoners the courage to sneak up to the roof of a nearby building and write “POW” in large letters for the aircrews to note and drop supplies. On the 26th, the prisoners woke up and found that the guards had left the camp. After getting picked up by a U.S. barge nine days later, they were truly free once again.

Read this story in Ken’s Men Against the Empire, Volume I.

14 thoughts on “Surviving in a Japanese POW Camp”