In early November 1942, the 22nd Bomb Group was ordered to fly a couple of missions to Dili, located on Timor Island. Australian ground troops had reported that the Japanese were using a Catholic cathedral as a supply dump, and that building was the primary target on the November 3rd mission. Shortly before noon, eight B-26s approached the island’s south shore. Aboard Lt. Harry O. Patteson’s B-26, co-pilot John Marcus noticed a very smoky fire on the shore. As the crews flew toward Dili, they noticed other smoky fires along the way, a basic signal to let the Japanese know that trouble was approaching.

By the time they arrived over Dili, any hopes of surprising the Japanese were dashed and Oscars from 59 Sentai were already taking off to engage the B-26s starting their bombing runs from 7500 to 8500 feet. The crews managed to score some direct hits on the first run, but then regrouped before going around for another run. At this point, 1/Lt. Charles I. Hitchcock’s B-26, #41-17593, was hit by two flak bursts that took out the landing gear and started a fire in the engine after tearing through the starboard nacelle. Noticing the stricken plane, the Oscar pilots took the opportunity to go after #593. Hitchcock activated the engine’s fire extinguisher and his co-pilot, Lt. Albert J. Pilkington used a hand fire extinguisher to put out the flames licking the instrument panel in the cockpit, then Hitchcock feathered the propeller. 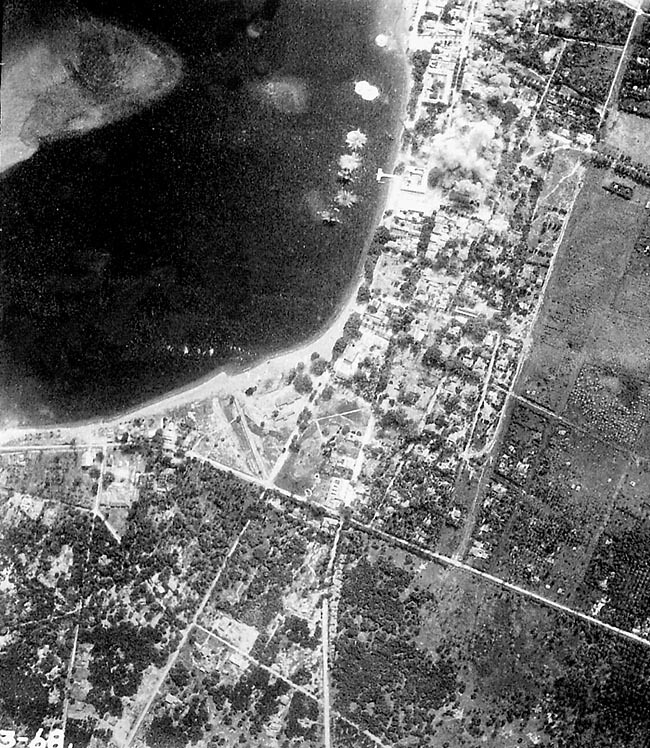 The 2nd, 19th and 408th Squadrons of the 22nd Bomb Group ended their period of stand-down on October 31st by sending a total of 12 B-26 Marauders to the norther coast of Australia to stage out of Darwin for a short series of missions against Dili, the capital of the Portuguese island of Timor. On the second Timor mission, November 3rd, 1/Lt. Charles C. Eberly, Jr., a 19th Squadron bombardier, placed a 2000-pound bomb on the cathedral, which was being used as a storage dump for ammunition. A large secondary explosion can be seen, as can less well-placed bombs that fell into the sea. (Jesse G. Homen Collection)

Down an engine, there was barely enough electricity to power the guns to fend off the attacking Oscars. Still, gunners reported shooting down two of the fighters. Below, an Australian guerrilla patrol watched the fight. The B-26 was falling far behind the rest of the formation and the Australians weren’t sure if it would even make it back to base. There was at least one hole in each propeller blade of the starboard wing and a substantial portion of the wing skin between the fuselage and the engine that had died. After a pilot in another B-26 noticed the plight of the Hitchcock crew, the rest of the B-26 formation turned around to fend off the Oscars and make sure #593 got home safely.

For the next two-and-a-half hours, Hitchcock and an escort flew back at much slower speed of 135 mph and at an altitude of 1000 feet. Then the working engine quit. The crew quickly got ready for a water landing and exited either by the force of the aircraft hitting the water or by swimming out of it. All but one man were bobbing on the water’s surface and Hitchcock made two trips back into the B-26. The first was to find the missing man, which he did, and the second was to release the life raft. Then the plane sunk. Sgt. Glenn A. Campbell, the severely injured crewman who Hitchcock rescued from the aircraft, died of a broken neck. He was buried at sea. Circling above them was Patteson’s B-26. His crew dropped a first aid kid and life raft, which were damaged in the fall. Low on fuel, he headed back to base.

A couple of hours later, the downed crew was visited by three more friendly aircraft dropping supplies and a note that a rescue boat would pick them up at 0600 hours. The men spent a sleepless night in the ocean and were overjoyed to see an Australian Navy tugboat coming to their aid the next morning.

Read this story in Revenge of the Red Raiders.

5 thoughts on “Firefight at Dili”