After World War II ended, the United States initiated Project Sunset, a program to bring as many crews and airworthy airplanes as possible back to the States for salvage, storage and smelting. Just like the days of ferrying aircraft to the Pacific Theater, crews would island-hop across the Pacific Ocean to their destination: home.

Each bomb group chose a crew to fly a plane back, and each crew spent several days getting ready for the flight ahead of them. They packed up, went on test flights with their planes, checked equipment and plotted courses. After Typhoon Louise roared through Okinawa from October 8th through 10th, some men discovered that their B-24s were damaged and would need to be repaired before they could go anywhere.

Captain Charles “Chuck” Fogo was one of the pilots whose assigned B-24 was in need of some repairs. His plane had been renamed HOME ALIVE IN 45 and the whole crew was determined to get back. As Fogo and some of his crew surveyed the B-24, they found signs of stress and a dangling aileron, among other things. A new aileron was procured under the cover of darkness and put in place soon after. The crew was ready for a test flight by October 18th.

Much to Fogo’s chagrin, the test flight of HOME ALIVE IN 45 was not as easy as he expected it to be. It took nearly the entire length of the runway before the B-24 could be coaxed into the air, hung low when cruising, didn’t fly straight and consumed roughly 25% more fuel than the average B-24. The crew figured that the typhoon had warped the fuselage structure, which would account for the rough ride. Still, they were going to bring it home, and began the journey two days later. 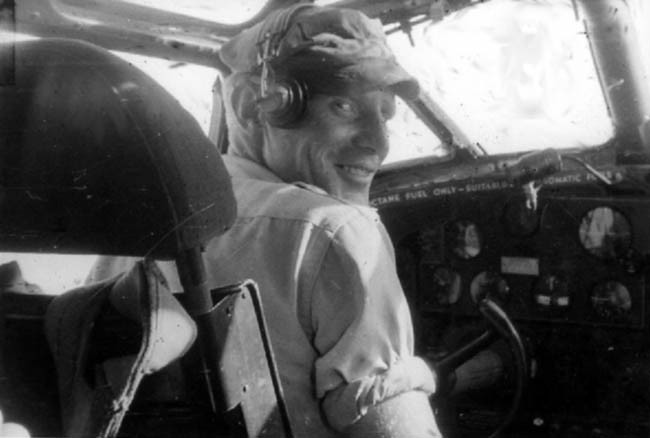 A smiling Capt. Charles “Chuck” Fogo has the Golden Gate Bridge in sight. The crew and passengers collectively breathed a sigh of relief. In a short time they would land in the good old United States. HOME ALIVE IN 45 had lived up to its name. (Don L. Evans Collection)

Just like the test flight, the B-24 didn’t lift off until the last second and the flight to Guam wasn’t any easier. From there, they flew to Johnston Island, five or six hundred miles away from Hickam Field, Hawaii. If the fuel consumption rate hadn’t been so dire, they would have skipped Johnston Island and gone directly to Hickam Field. After landing in Hawaii, they hung around for several days in hopes of flying with a good tailwind to boost their chances of getting home. Captain Fogo didn’t think HOME ALIVE IN 45 would make it back without running out of fuel. The Base Operations Officer wasn’t happy with their delay and forced them to move on.

Before the flight on October 25th, the crew got to remove the ball turret, lightening and streamlining their plane. About six hours away from Mather Field, California, the fuel situation was looking uncertain. With 1000 gallons left and 200 gallons being consumed per hour, the math was not in their favor. Fogo reduced the RPMs as much as he could and put the B-24 into a shallow descent to conserve the remaining fuel.

Flying over the Golden Gate Bridge, the crew felt like they could make it to Mather Field instead of making an emergency landing at Hamilton Field. Upon landing, Capt. Fogo recommended that HOME ALIVE IN 45 be salvaged at Mather Field instead of continuing on to Kingman, Arizona. He and his crew celebrated their return home with a steak dinner and cold milk, then fell asleep on real mattresses.