In 1999, Clayton A. Dietrich, veteran of the 89th Squadron, 3rd Bomb Group sat down for an interview that covered his service in World War II. Prior to his war assignment, Dietrich graduated with a B.A. in 1940 and completed his first year of law school in 1941. As an undergrad, he joined the ROTC because all able-bodied males attending the University of Maryland were required to have two years of military training. Dietrich was commissioned as a second lieutenant and later notified that he would have to complete a year of active duty in the military to meet the equivalency requirement. Within a month or two, he found himself in the 89th Squadron at the Savannah Army Air Base in Savannah, Georgia and was assigned the squadron supply office. With a year of law school under his belt he was also immersed in the court happenings on the base.

About once a month, men were assigned to be the Officer of the Day. As such, the officer had to make two rounds of the posts on base, one before midnight and one after midnight. Dietrich wasn’t the type of person to lazily fulfill his duties and came up with his own ways to keep the guards on their toes. He felt that the general attitude on guarding the base was too lax, so he always lectured the men before they went on guard duty on how he expected them to conduct themselves. “Then I’d find out from the sergeant of the guard — because they were like the old-timers — they knew how things worked … I found that usually what most officers did was go from post 1 to post 20. You make the rounds in the Jeep. The sergeant drives it, you ride with him, you get out and you check the guard on the post and you go back.” 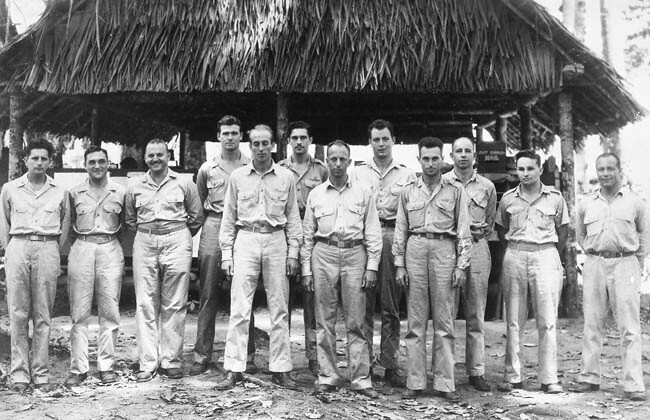 Clayton Dietrich (2nd from the right), stands for a picture with members of the 3rd Bomb Group HQ and the squadron Commanding Officers in Dobodura. (John Henebry Collection)

When he made his rounds, he started earlier in the evening when guards wouldn’t expect the officer to show up. Coming up to the posts, he tell the sergeant to turn off the car’s lights and park about a football field’s length away from each post, then walk quietly toward the guard. “Anybody in their right mind would be apprehensive. It would make guards quite nervous as to who is this somebody — a wrong doer.” When the guard would yell, “Halt! Who’s there?” Dietrich would remain silent and continue to walk toward the very nervous guard. He wanted to see how they would react in the tense situation. “The next step was they’d put a shell in their rifle chamber. When I heard them put the shell in their chamber, then I’d identify myself. I wasn’t a fool.”

He would then ask if the guard knew the special orders of the post, then the general orders. “It’s like a little Bible for guard duty. I don’t remember what they are myself today, but I knew them by heart then.” The guard was then quizzed on about three of the general orders before he would leave them and go on to the next post. If he caught a guard not paying attention, he’d walk up behind a guard, grab them, and say “I got you.” to get an idea of what could happen if someone tried to infiltrate the camp. To Dietrich, this was training for life in active duty and a chance to remind guards that their job, as boring as it could be, was still very important.

7 thoughts on “Officer of the Day”