It’s been 76 years since the Battle of the Bismarck Sea took place. A team effort to keep Japanese ships from reaching their destination led to a fierce multi-day battle that ended in an Allied victory. Below, we follow one bomb group’s participation during part of that battle. This post was first published in March 2017.

After spotting a convoy of reinforcements sailing from Rabaul to Lae on March 1, 1943, Fifth Air Force sprang into action as General Kenney ordered the 43rd, 90th, 38th, and 3rd Bomb Groups to sink this convoy before it could reach its destination. The RAAF also joined the fray in their A-20s by raiding the airdrome at Lae to prevent any enemy fighters from taking off, and 30 Squadron Beaufighters also attacked the convoy. Attacks on the Japanese ships began on March 2nd, sinking one transport ship, with the bulk of the strikes taking place on the 3rd.

March 3rd began with the 71st and 405th Squadrons making low-level attacks on the convoy, which, as of that morning, consisted of eight destroyers sheltering seven transports. Although the B-25s were flying through heavy antiaircraft fire, none of them came away heavily damaged. By contrast, many of the ships were left stalled and smoking by the time the two squadrons headed home. This was to be a two-mission day, as the crews were to return to the Bismarck Sea that afternoon after their aircraft were reloaded with bombs and fuel. General Ennis C. Whitehead, the deputy Commander of Fifth Air Force, made a personal appearance at the 38th Bomb Group camp to get a full account of the morning’s events from the men. Back at Rabaul, the Japanese prepared to send additional fighters to aid in the defense of the convoy for the afternoon rematch.

Heading back to the Bismarck Sea, the 38th crews began their search for the convoy. They soon arrived, first encountering two ships dead in the water, then a few more burning away. As Capt. Ezra Best lined up for an attack on a destroyer from medium altitude, gunners on his B-25 GRASS CUTTER began firing at Oscar fighters from 11 Sentai that surprised the 71st Squadron. While there was an exchange of gun fire, it wasn’t as intense compared to the battles at high altitude earlier in the day. 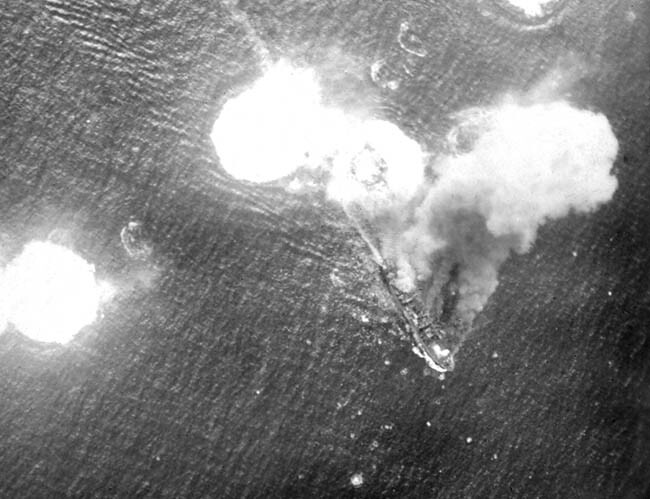 The Battle of the Bismarck Sea resulted in the destruction of the Japanese fleet that carried troops to reinforce Lae. The 71st Squadron bombed the convoy from 5000 feet. Pictured here is one of the transports with palls of smoke rising from its decks after the 71stʼs attack. (Brian O’Neill Collection)

Meanwhile, pilots from the 405th Squadron decided to target a cluster of three ships, two of which were still moving. Several bursts of antiaircraft fire were thrown at the incoming B-25s with one exploding right in front of FILTHY LIL, piloted by 1/Lt. Adkins. The plane filled with smoke and the nose was jerked upward by the blast, knocking it out of formation. Briefly, the pilot and co-pilot thought that FILTHY LIL received severe damage and would have to be ditched, but it turned out that the nose only had a small hole. The pilot and co-pilot went off in search of a target, only to come across a destroyed transport with survivors floating in the water. They were strafed by the gunners* until their ammo ran out, then FILTHY LIL turned for home. Co-pilot 1/Lt. John Donegan wrote about his state of mind during the mission: “our destruction was not for mercy: it was simply that to us all Japanese soldiers had become things to be annihilated, not necessarily cruelly, but always thoroughly.”

For the Allies, the Battle of the Bismarck Sea was a resounding success. All eight Japanese transports and four destroyers were sunk. This raid also demonstrated that a relatively new tactic, low-level bombing, was an effective method for attacking enemy ships.

*Note: If you’ve read our previous Bismarck Sea post, you have read about the Japanese shooting at 43rd crewmembers who bailed out of their B-17. We cannot determine if the 38th knew about these events prior to their afternoon mission.

6 thoughts on “Repost: The 38th Joins in the Battle of the Bismarck Sea”