It had been more than a month since the 22nd Bomb Group last encountered fighter opposition on a mission. With an eye on the Palau Islands, the Red Raiders were sent to disrupt the Japanese airfields and destroy installations on June 9, 1944, prior to the invasion of the Marianas island chain in the central Pacific later in the month.

The plan was for 26 B-24s to fly from Hollandia to Wakde Island, where their fuel tanks would be topped off, and then they would continue to their target of Peleliu Island. Much to the annoyance of the crews, Murphy’s Law struck several times over the course of the mission and only 11 aircraft completed the mission. Bad weather forced several crews to turn around, others made navigational errors that led them to miss the target completely (they made it back to Wakde safely) and others were unable to make it to the target due to mechanical problems.

As 1/Lt. Dwaine E. Harry of the 408th Squadron approached Peleliu with the other B-24s in his squadron, weather became enough of an issue that Harry had to separate from the formation. He was jumped by several Zeros three miles out from the island. The lone B-24, ISLAND QUEEN, went into a dive, pulling up 20 feet above the water. Aboard the lead Zero, the pilot dropped his wing tanks in hopes of hitting the B-24 below. He missed. A second Zero made a pass at ISLAND QUEEN and the the gunners promptly returned fire, severely damaging the tail section of the Zero. The fight lasted for 25 minutes, then ISLAND QUEEN turned for Hollandia, landing without further incident. 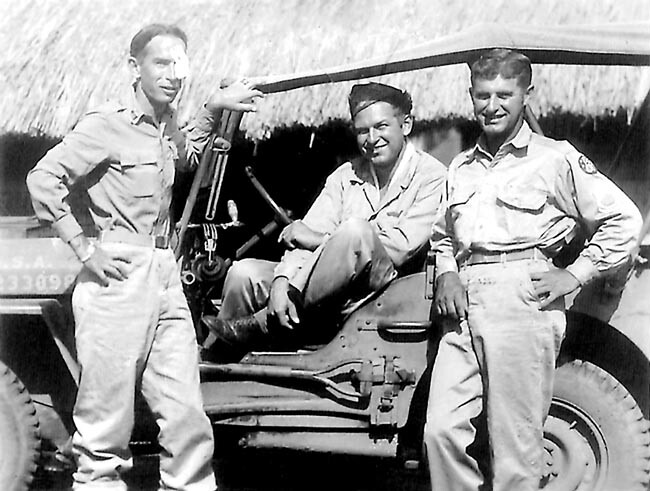 Two survivors from the B-24 ditched by the Barley crew off the coast of New Guinea on June 9th were photographed shortly after their return to Nadzab. In front of the Squadron intelligence hut were at left, Capt. John N. Barley, pilot; center is Maj. Glenn E. Cole, 408th Squadron C.O., and at right is T/Sgt. Frederick E. Pelegrin, engineer and top turret gunner. (John N. Barley Collection)

Approaching the target area, the remaining B-24s were met by several Zeros. Along with the usual attacks on the B-24s, the Zero pilots dropped phosphorus bombs and something that looked like heavy chains in front of the 22nd’s formation. Every plane was damaged in the fight. Captain John N. Barley’s aircraft was hit in the right inboard wing tanks, the fuselage and the #3 engine. A fire that started in an ammunition box burned some crewmen but it was quickly extinguished. Both waist gunners were wounded by gunfire, and one of them was dead 30 minutes after he had been hit in the forehead and stomach. A cloud bank provided enough cover to duck into and end the fight.

The crews managed to drop their bombs and began the long trip back home through more bad weather. Barley’s plane made a startling dive toward the sea when it was caught in a downdraft, but he and his co-pilot managed to level out before they hit the water. They flew on at a lower altitude, though they were now unsure of their exact position. Keeping an eye out for familiar landmarks, the crew flew along the New Guinea coastline until the B-24’s fuel supply dwindled and daylight waned. Captain Barley made a water landing about a mile and a half from Sissano Lagoon, located about 25 miles up the coast from Tadji. The tail broke off in the ditching, and nine crewmen exited the plane with new injuries from the ditching.

It took four hours for two of Barley’s crewmen to swim to the beach. One man was pushing the other because he was too injured to swim on his own. They met up with pilot and co-pilot, but the other five men were nowhere to be found. A constable from a nearby village found the airmen stranded on the shore. Barley knew he needed to get help for his crew, and asked if there were any American units nearby. The officer was willing to lead him to the nearest Allied presence, which turned out to be about a day’s walk away. They arrived at an Australian outpost, where the American base was contacted and help was promptly dispatched. The waiting crewmembers were rescued. What happened to the other five remains a mystery, although it’s possible that they were captured by the Japanese.

This story can be found in our book Revenge of the Red Raiders.

6 thoughts on “When Plans Go Awry: A Mission to Palau”