On the night of November 26th, 1943, the 345th Bomb Group was assigned a raid against Boram Airdrome. Expecting heavy antiaircraft fire, Captain William L. Kizzire and his fellow 498th Bomb Squadron pilot Lt. Melvin Best debated how best to handle a shot-out engine. A B-25 could fly on a single engine if the propeller was feathered, but if it couldn’t be feathered, the drag created by a windmilling prop would keep the B-25 from flying for very long. They decided the best strategy was to fly out to sea and wait for an Allied submarine to pick them up.

The next day, the 498th took the worst of the ack-ack. They were the last over the target, so the antiaircraft gunners had the most time to prepare. As Kizzire led his flight to the Boram coastline, he spotted a wooden ship in the harbor to strafe. A well-aimed shell from a nearby freighter took out the right engine on Kizzire’s B-25 IMPATIENT VIRGIN. Over the radio, Best, his left wingman, heard “God-a-mighty, I can’t feather it.” The oil reservoir used for feathering the propeller was damaged.

In the heat of the moment, Kizzire deviated from the prepared strategy, and instead flew about 35 miles down the coast to a suitable spot to ditch the B-25. He landed in Murik Lake, a lagoon about five feet deep at the mouth of the Sepik River. Everyone climbed out of the aircraft and fellow aircrews circling above dropped supplies to the downed airmen. Back at Bomber Command, Col. Jarred V. Crabb tried to get a Navy Catalina out to rescue the crew. He was unsuccessful. 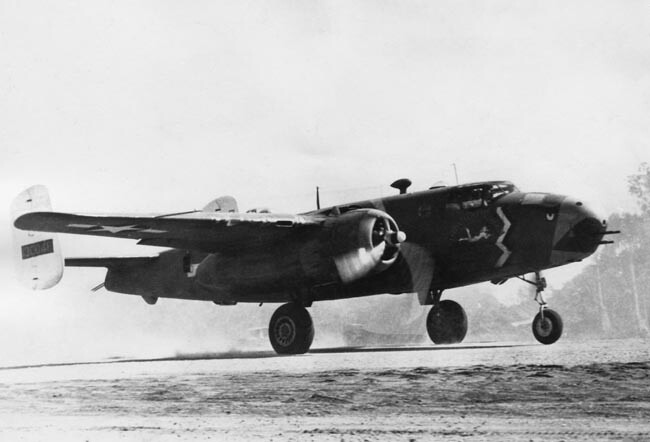 B-25D-5 #41-30046, IMPATIENT VIRGIN, seen here taking off, was hit by antiaircraft fire near Wewak on November 27, 1943 and crash-landed into the shallow water of Murik Lagood about 35 miles east of the target. Captain William L. Kizzire of the 498th Bomb Squadron, 345th Bomb Group and his crew reached shore safely but eventually fell into the hands of the Japanese. (Clifford C. Cottam Collection)

Lieutenant Ralph Robinette took off on a search for the crew the next morning with clothes and boots for each man as well as survival items to hold them over until they could be rescued. Kizzire’s navigator, 1/Lt. Joseph W. Carroll, and another crewmember were spotted near the lagoon and the supplies were dropped nearby. Robinette wrote a note telling them to wait by the lagoon for a Catalina and handed it to his co-pilot to drop from the flare shoot, but, in all the excitement, he forgot to do so. After Robinette flew back to Port Moresby, he secured a Catalina and headed back to the lagoon with the crew. Approaching the area, they spotted three flares west of the lagoon. Above the Catalina flew an unwelcome visitor, a Japanese Betty bomber.

Reluctantly, the pilot called off the search in case the pilot of the Betty called in some fighters to attack the Catalina. Around sunrise the next morning, the Catalina returned, the crew aboard fruitlessly searching the area for an hour and a half. About an hour later, another Catalina showed up with a fighter escort, also searching for the downed crew. They were never found. It wasn’t until March 1944 when three names from Kizzire’s crew were mentioned over an unofficial shortwave broadcast in English. These three men were alive and safe after being captured in Wewak. It was the last thing anyone ever heard about the crew.

This isn’t the only story from the November 27th raid at Boram. Read another one here.

14 thoughts on “The Disappearance of Capt Kizzire’s Crew”