A Nerve-Racking Flight on SO SORRY
Captain Gerald J. Crosson was leading B-26s from the 2nd Squadron to Lae on January 3, 1943, where they were to bomb sailing vessels in the area, or the airdrome if the boats couldn’t be found. The aircrews thoroughly searched the area between Lae and Cape Cretin and failed to find the boats. They turned for the airdrome and were met by flak sent up by the alert Japanese antiaircraft gunners. Before Crosson’s bombs were released, his B-26 SO SORRY jolted around and there was a sound of rattling metal in the cockpit. SO SORRY nosed upward in an unanticipated climb and Crosson worked frantically to right the plane. Bombardier T/Sgt. T.J. Smith saw that the bomb bay doors were still open, then noticed that the bombs were still in their racks. He carefully eased himself onto the catwalk where he manually jettisoned the bombs.

Meanwhile, Crosson and his co-pilot struggled to maintain a level course as they dealt with a cut elevator cable, bomb bay doors that wouldn’t close and dragging flaps. SO SORRY dropped out of formation and flew on at about 700 feet in bad weather. The crew was happy to spot Dobodura 50 minutes later, but everyone knew they were in for a rough landing because the aircraft was so unstable, the landing gear wouldn’t lower and the aileron controls were damaged. In spite of everything, Crosson brought the B-26 down safely, and, remarkably, without injury to the crew.

The Rise of the Silver Fleet
Since the early days of the 22nd Bomb Group’s formation and involvement in World War II, the unit was designated a medium bomber unit and the men flew B-26 Marauders on missions. This would last until April 1943, when three of the four squadrons were told that their B-26s would be phased out and replaced with B-25s. At a meeting, the 19th Squadron pilots said they preferred flying the B-26 and the Marauders were given to that squadron. They were stripped of their camouflage paint, which increased their speed by a few miles per hour, as well as given a complete overhaul for optimal performance. First Lieutenant James C. Houston came up with the “Silver Fleet” nickname and an accompanying logo. The 19th would remain the silver fleet until January 1944 when the B-26 was completely phased out of the Pacific Theater and the 22nd Bomb Group was redesignated a heavy bombardment group and transitioned to the B-24. 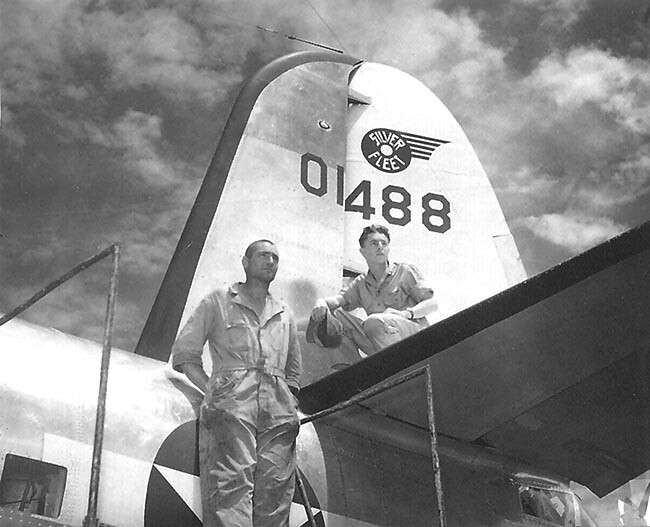 For a short time, the 19th Squadron, 22nd Bomb Group was know as the “Silver Fleet.” This nickname referred to the fact that the unit was flying the only combat aircraft in the theater in a natural metal finish. This insignia and nickname were the work of bombardier 1/Lt. James C. Houston, who adapted it from the model railroad with which he played during his youth. Here, the 19th Squadron Line Chief, M/Sgt. Raymond D. Fuller, and Maj. Walter H. Greer, the Squadron C.O., can be seen posing with the new insignia on the tail of B-26 #40-1488, which carried the nickname HOOSIER MISS during its service with the Silver Fleet. (J. William Brosius Collection)

The Practice Bomb Squadron
After several reports of poor bombing records from the Silver Fleet, the squadron was removed from combat in late July 1943 for three weeks so crews could receive additional training. Not only did accuracy leave something to be desired, there were bombs handing up in the racks. When the 19th Squadron returned to combat, one crew discovered the additional training paid off: all ten bombs were dropped in the target area and hit crucial targets.

Read these stories in Revenge of the Red Raiders.