After a rough start at Gusap in late 1943/early 1944, the men of the 312th Bomb Group had adapted to life in their muddy, temporary home by May. For the most part, their meals consisted of canned meat and dehydrated vegetables or potatoes. The occasional shipment of fresh food from Australia was heartily welcomed by everyone. At times, men would trade items such as razors and cigarettes for bananas, papayas, or coconuts from the villagers. If they weren’t looking for something to eat, they would trade for bows and arrows to keep as souvenirs. Somehow, the 312th acquired a Coke machine with the help of Lt. Harold Friedman of the Special Services section.

New equipment and crews were filtering into the unit when they were needed, which also made life in the Pacific easier. So, too, did plumbing and wooden floors as well as a laundry service. At this point, the 312th got to watch American movies on a regular basis and visit Australia for some rest and relaxation more often. There was also less disease in camp, and all these things contributed to a higher morale among the men in the unit.

It wasn’t long after the Hollandia raids of April 1944 that rumors of moving to Hollandia began to fly. Because that base required more development before it could accommodate the 312th, the air echelon of the Group was temporarily moved to Nadzab on June 11th. The move came with a few perks, namely newer movies and treats such as cookies, candy and juice. Meanwhile, the remainder of the unit had received orders on May 30th to head to Hollandia. Their move was staggered over June and July, as there was a shortage of C-47s to transport larger groups of men.

Upon arrival at Hollandia, it looked like the Japanese had left the base in a hurry. Aside from aircraft, vehicles and equipment strewn about, they had left behind clothing and blankets. Those and the huts they lived in were burned and the equipment was stripped of anything that might prove to be valuable
for trade with infantrymen. There were instances of hungry Japanese soldiers going through camp to scavenge for food, but none of them were captured or shot by the 312th. Around the end of June, the air echelon began trickling in and got to experience the most annoying thing about Hollandia: the dust. It was everywhere and got into everything. 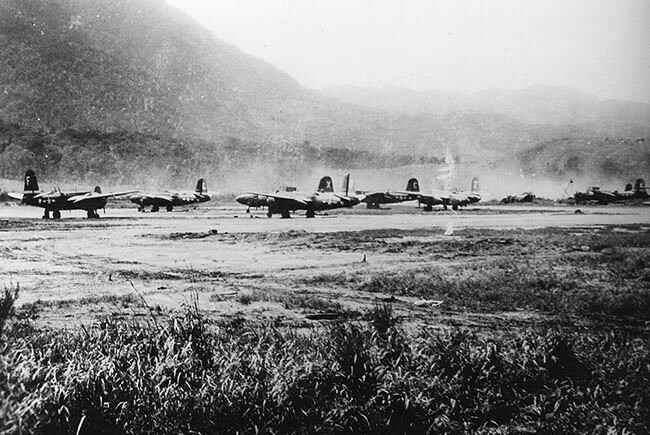 The 388th Squadronʼs parked A-20s can be seen at Hollandia with dust rising from a road in the background. Depending on the amount of rainfall, dust was a recurrent problem for operations from the base. (Martin P. DeNicola Collection)

Aircraft were covered as much as possible to keep the dust from getting into engines, turrets and cockpits. Taxiing around Hollandia was a tense experience because dust clouds created by A-20s greatly reduced visibility and planes seemed to come out of nowhere all of a sudden. To combat these issues, engines were kept at idling speed and line chiefs in jeeps were often used to guide pilots to the busy airstrips.

The men began to long for Gusap. It was much quieter, there was less dust, the recreation facilities were better and they got to enjoy cool breezes through their campsite. Food quality hadn’t improved and they were still waiting for more regular mail deliveries. Still, morale remained high and they knew it was a step forward in the war.

Read more about the 312th Bomb Group in our book Rampage of the Roarin’ 20’s.

6 thoughts on “Camp Life: Gusap to Nadzab to Hollandia”