May 18, 1945 was an all too eventful day for the 65th Bomb Squadron, 43rd Bomb Group. Seven of its B-24s were sent to make up a third of a 21-plane raid with the 403rd and 64th Squadrons on Tainan Airdrome, located on Formosa (now Taiwan). Antiaircraft fire was heavy and accurate, and coming from both Tainan and the nearby Okayama Airdrome. Aircrews noticed two strange types of antiaircraft bursts. One looked like a gasoline fire bursting in midair, the other appeared to be a stream of fire trailed by smoke.

As the crews made their runs, 1/Lt. James J. Franklin’s B-24 took a direct hit and exploded. All ten members of the crew as well as an observer were killed. To the right of Franklin was 1/Lt. Rudolph J. Cherkauer in B-24 #373, which felt the brunt of the explosion and ended up leaving Tainan with two hundred new holes and three wounded men aboard. The bombardier was knocked unconscious by the blast. Both port engines were smoking heavily, but the #2 was still capable of running at reduced power. It was enough to get them to the emergency field at Lingayen, Luzon. The three wounded crewmen were brought to the hospital and eventually recovered. 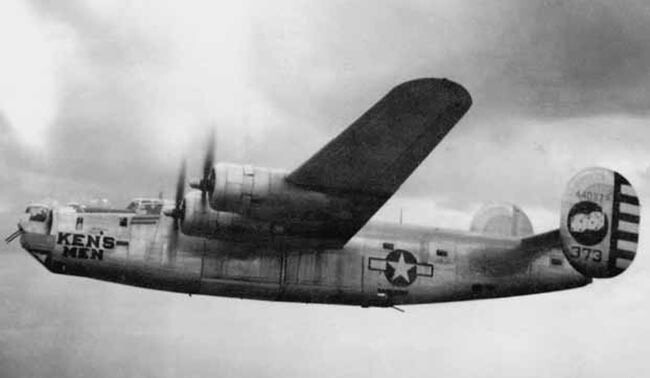 This 65th Squadron B-24, nicknamed PETTY GAL, was almost shot down in a bombing mission over Tainan Drome on Formosa. The antiaircraft fire alone was responsible for bringing down two B-24s, and it put around 200 holes in PETTY GAL. Fortunately, pilot 1/Lt. Rudolph J. Cherkauer was able to bring it back to Lingayen on three engines. (James L. Klein Collection)

First Lieutenant Charles H. Wilt, another 65th Squadron pilot, finished his run and was hit in the #4 engine. To make matters worse, the #3 engine was running away and the smell of gas permeated the fuselage. Everyone on board knew they needed to bail out before their B-24 exploded, but they were warned against it by PBY crews standing by for rescues. By that point, Wilt’s B-24 was 6000 feet above rough seas with 25-foot waves, which would make it harder for rescue crews to find the downed airmen. Still, the crew felt like everyone would have a better chance of survival if the men bailed out.

Unfortunately, they were also short on life jackets. Four of the 11 crewmen had to go without, including 2/Lt. Norbert C. Straeck, who volunteered because he was a strong swimmer. The other B-24 crews watched 11 parachutes open and only the men with the Mae Wests were rescued. Two men went under before they were fished out and two more disappeared. It was a tough day for the 65th Squadron, losing 15 men and two B-24s. A funeral for the 15 men, 1/Lt. James J. Franklin, 2/Lt. Frances J. Smith, 2/Lt. Darrell F. Hoffman, 2/Lt. John R. Duff, Cpl. Walter J. McKay, Jr., T/Sgt. Henry A. Cichy, T/Sgt. Francis J. Dougherty, S/Sgt. Lloyd B. Arie, S/Sgt. Frank D. Byrd, S/Sgt. Donald C. Gayle, S/Sgt. Sigmund J. Magiera, 2/Lt. Norbert C. Straeck, 2/Lt. Gabriel R. Levinson, Cpl. Walter J. Christensen and Cpl. Lehland Stauffer, was held on May 23rd at the 43rd’s chapel. Below is reproduced the order of service for the event:

Choral Prelude Choir
Call to Worship
Leader: Renewed this day be all noble memories
People: All high and holy traditions of the past
Leader: Let us remember all those who went over the sea
to share the perils of oppressed peoples
People: Who suffer torment from fire and smoke
Leader: Who took food to the starving in strange lands
People: Who went down to the sea in ships and into the
air like eagles.

Call to prayer
Leader: The great and brave who have gone before us and
blazed the trail, gave freely of their talents, their strength,
their lives. We who would remember them to-day unite
our prayers in memory of their noble giving. Let us pray
together.

Unison Prayer
O God, here in the memory of death we pause in thy sight
for life is precious to thee. Even as the life of those we know
and care for is dear to us so dost thou care for each of thy
children. And because we know this we have no fear for
those we know who leave us to return to thee. Their release
from the limitations of the flesh is a greater freedom than
ever they have known before. Lift us above the shadow of
mortality into the light of hope.