Delivered to the AAF on July 8, 1944, this “H” model went into service with the 389th Squadron in March 1945. The pilot was Maj. James M. Wylie, the 389th Squadron C.O., and he named the aircraft MICKEY, after his wife’s nickname. When S/Sgt. Orian E. Hackler, the crew chief, asked about a tail identifier, Wylie replied that it would be nice to have “X,” for “X marks the spot.”

Wylie claimed this aircraft was a “pilot’s dream,”, and he flew most of his missions in it. On one, he almost lost control of it over Nichols Field on February 6, 1945. An unexploded 20mm shell tore through one wing and the plane swooped towards the ground before Wylie regained control and returned his damaged mount to Mangaldan. Afterwards, the aircraft received only occasional small arms hits. The profile painting shows MICKEY at Mangaldan during April 1945, with 67 missions arranged around the large spade scoreboard. This aircraft carried a skull and crossbones on the nose, and the crew ID panel, done as a scroll, stated: PILOT ~ MAJ. J.M.WYLIE; on a second line: c.c. T/SGT HACKLER.

In June 1945, Wylie transferred to Headquarters, Far East Air Forces. Seventy-five of his 77 combat missions were flown in MICKEY. The aircraft was assigned next to 1/Lt. Lloyd A. Wilson, but details are lacking. Yet a third pilot also flew the plane before the war ended, and it is his name, “PILOT ~ CAPT. BEARDSLEE” that now appeared on the ID panel, reversed to white lettering on a black background that was on the plane when it was used as a backdrop for Squadron photos taken in late July 1945. By this time, the scoreboard from Maj. Wylie’s service had been removed from inside the spade design, and the name MICKEY had been replaced by LITA~BONITA. The port machine gun also was enhanced with a black background, with the forward half of the area decorated in white. It is this version that is shown on the port insert profile. Probably at this time, but perhaps earlier, a large spade was painted in a similar position on the other side of the plane, incorporating a pin-up girl from a Gil Elvgren work entitled “Fun House.” This is the image on the second profile insert. After the war ended, LITA~BONITA was flown with the rest of the Squadron’s aircraft to Biak, where it was scrapped several years later.

View the color profile on page 208 of our book Rampage of the Roarin’ 20’s. 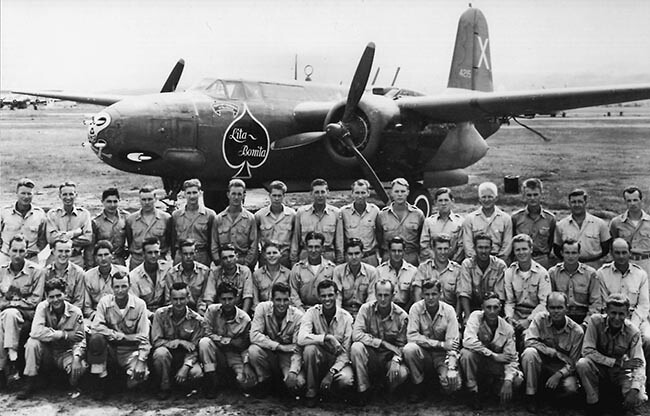