After a successful day of bombing Clark Field on December 22, 1944, the 22nd Bomb Group returned to the area on December 24th. There, they were going to target Japanese aircraft located in revetments and parking areas. Several miles outside of Clark Field, the B-24s and their P-47 fighter cover were jumped by 20-40 Japanese fighters. Two Zeros dropped air-to-air bombs, which did not damage any of the B-24s, and neither did the phosphorus bombs that were dropped by the Japanese fighters. Above the 22nd flew a lone Betty bomber, which was most likely radioing airspeed and altitude information to the antiaircraft batteries at Clark Field. This proved to be a problem for the B-24s, as they were greeted with heavy, accurate antiaircraft fire from the Japanese.

Right after 1/Lt. Cameron B. Benson released his bombs over the airfield, his B-24 was rocked by an explosion in the rear fuselage that also damaged the tail section and the hydraulic lines. The explosion nearly broke the aircraft apart, instantly killing the radio operator, T/Sgt. Paul Deis, who had been manning the right waist gun. At the left waist gun, T/Sgt. Vernon J. Farup, an assistant engineer, sustained injuries to his legs from shell fragments. Ammunition aboard the plane began going off and members of the crew rushed to toss the boxes of ammo out the windows. 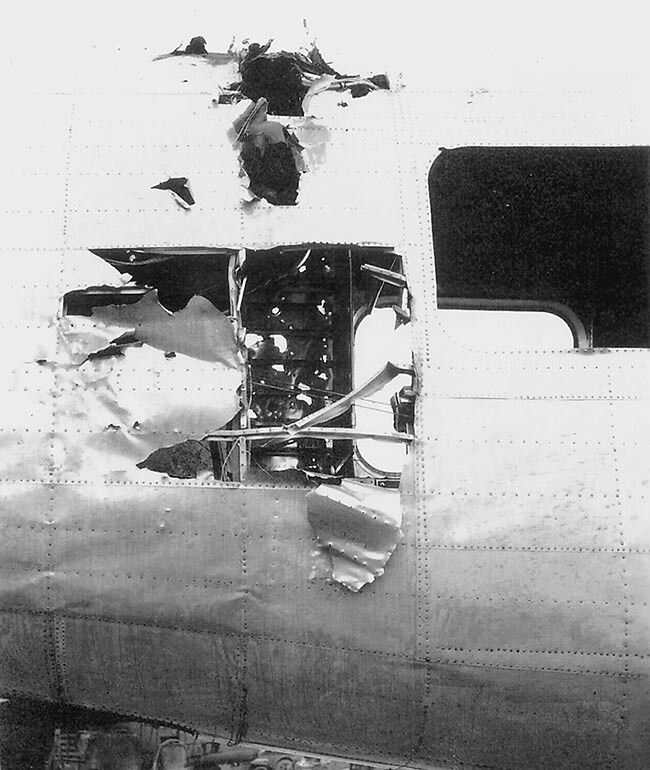 On December 24, 1944, this 2nd Squadron, 22nd Bomb Group B-24 was damaged over Clark Field after an exploding 75mm antiaircraft shell blew out the side of the plane, killing T/Sgt. Paul Deis, the radio operator, and badly injuring T/Sgt. Vernon J. Farup, the assistant engineer. Both men were manning the waist guns. Despite the instability caused by the damage, 1/Lt. Cameron B. Benson, the pilot, brought the plane in for a successful emergency landing at Tacloban Strip on Leyte Island. (Robert W. Hulme Collection)

None of the 2nd Squadron’s six aircraft escaped Clark Field unscathed. Lieutenant Scott’s aircraft was hit multiple times by flak, one of which damaged the gears for the bomb bay doors. Once Scott made it back to base, he had to land with the bomb bay doors open. Lieutenant Barron left Clark Field with a hole in the right wing between the two engines that punctured the fuel tanks and leaked 600-700 gallons. Both Benson and Barron were able to land safely at Tacloban.

Back at Clark Field, the 19th Squadron was attacked by about two dozen Japanese fighters before they began their bombing run. They were able to fend off the attackers and make their runs. Only two out of the five B-24s from the 19th made it through unscathed. Captain Hume and his crew managed to escape serious injury and aircraft damage when a shell went through their plane, then exploded above it. Two of the 33rd Squadron’s B-24s were damaged, though none of it was severe. Gunners managed to pick off three attacking Zeros with a fourth probable. Three of the 408th Squadron’s aircraft were holed, but also without any serious damage.

In spite of the heavy opposition from the Japanese, the 22nd left Clark Field knowing that their attack was a success. Many of the Japanese planes on the ground were damaged and at least 15 were destroyed. A total of four Japanese fighters were shot down, with a few more probables. The 22nd refueled at Tacloban, with Benson’s, Barron’s and a third crew distributing themselves among the rest of the B-24s that were capable of flying back to Angaur. Farup stayed behind in the hospital at Tacloban. That night and the next day, the 22nd rested and celebrated Christmas. They would return to Clark Field the following day.

This story can be found in our book Revenge of the Red Raiders.