About halfway through 1943, the United States developed new radar technology that allowed heavy bombers to attack shipping targets at night. Shortly thereafter, the 1st Sea Search Attack Group was formed at Langley Field, Virginia. Most of these crews were brand new, and as they learned flight basics, they were also trained on how to use the Low Altitude Bombsight (LAB). Two of the three squadrons were sent to the Pacific Theater for night bombing missions. One, the 868th Squadron, operated independently. The other was integrated into the 63rd Squadron, 43rd Bomb Group. One member of the 63rd Squadron wrote about the way the LAB was used on a mission.

The Radar was the SCR 717A, 10cm wavelength, and had a 200 mile range at about 3000 ft. altitude. The bomb sight was on RC17 Low Altitude Bomb sight (LAB) and had to be adjusted for a specific altitude and bomb configuration. I would usually set it up for a 400 feet altitude drop and a 500-1000-500 (pounds) bomb configuration. A radio altimeter would maintain the altitude through the auto-pilot with no need for hands-on by the crew.

A search would be made at max range (about 3000 feet altitude), and when a target was sighted, and IFF [Identification Friend or Foe] interrogation revealed an enemy, the run would begin. Gradually dropping in altitude to keep the target at maximum range would prevent enemy radar (which was less sophisticated than ours) from picking us up. After a period, we would be at minimum altitude, with the bombardier in charge of the plane. His job was to keep the target between crosshairs which maintained azimuth [the angle of the aircraft] and allowed the electronics to separate the target and a voltage pip correctly. At the exact start range for the bombs, the voltage pip would come up and intersect the target pip. The increased voltage would trigger the intervalometer and drop the bombs automatically.

The following page may have appeared in CROSSHAIRS magazine in the late 1980s or early 1990. 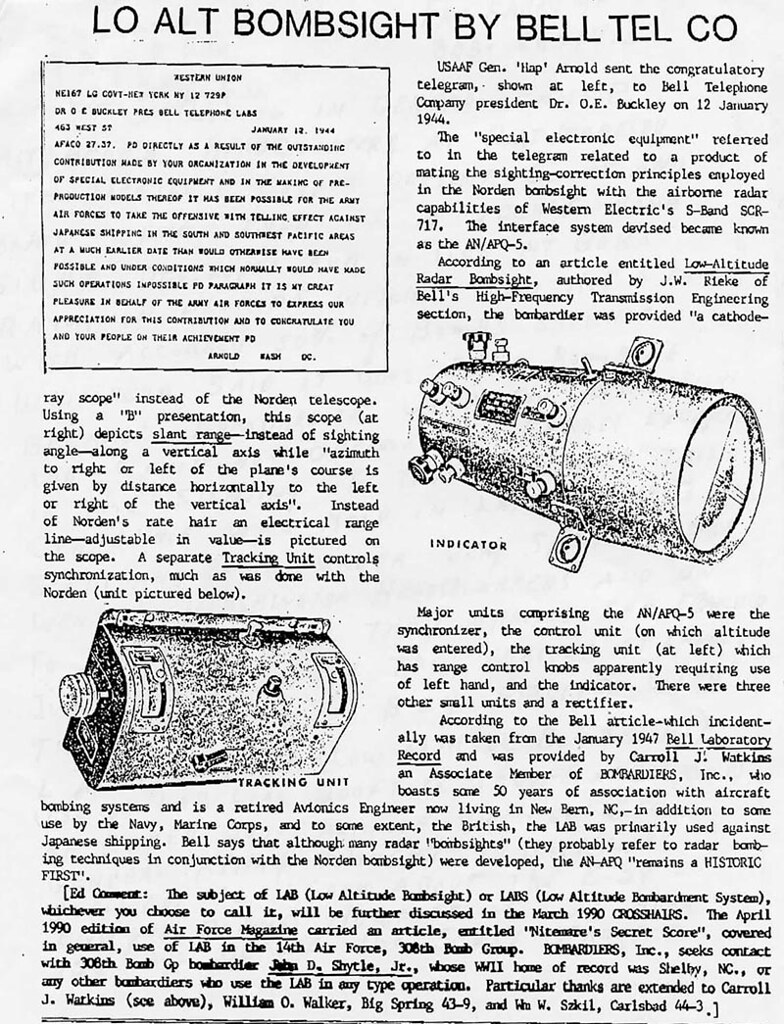 6 thoughts on “Working With the Low Altitude Bombsight”