Nadzab was drenched by heavy rain the night before Fifth Air Force’s big raid on Hollandia on April 16, 1944. When the men of the 22nd Bomb Group rose on the morning of the 16th, they were greeted with overcast skies and plenty of humidity. Six B-24s from each of the four squadron were to be sent to Hollandia, but takeoff was delayed by an hour after the sun broke through the low clouds.

Lieutenant Raysor took off with the 408th Squadron around 0900 hours and everything was running smoothly. About 80 miles in, the Squadron passed Gusap and Raysor pulled away from the rest of the 408th. His airplane’s engines were having trouble and he had to get back to Gusap. The engineer, Sgt. Milford H. Cummings, was told about the engine trouble and jettisoned the bombs and closed the bomb bay doors as the B-24 descended. Cummings warned the crewmen to ready themselves for a crash landing (they were too low to safely bail out), then went back to the cockpit where Raysor told Cummings that he had shut down three of the four engines because the superchargers weren’t working properly.

Cummings knew the pilot had made the wrong decision: the superchargers were not as important to the engines at low altitudes. Unfortunately, it was too late to fix the mistake and the single working engine couldn’t keep the plane in the air. The aircraft kept losing altitude and crashed about a mile from the north end of the runway. Cummings was ejected from the plane and not seriously injured. Only two other crewmen survived the crash. The rest, including Raysor, were killed. 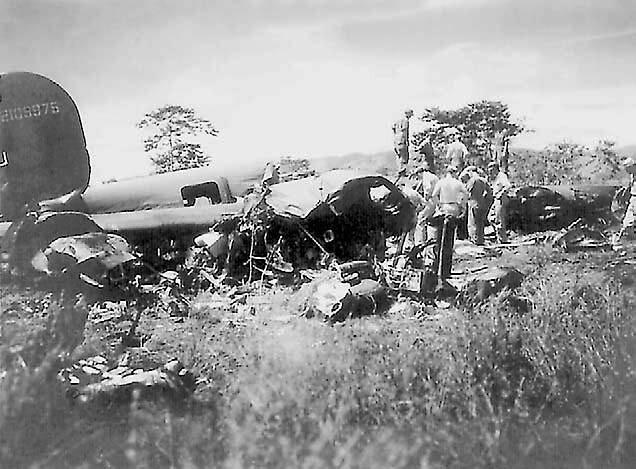 The 22nd Bomb Group dispatched 24 Liberators on another major Fifth Air Force strike against the Hollandia area on April 16, 1944. Although predicted weather conditions were marginal when the planes departed, the raid was deemed essential since Hollandia was targeted for a surprise invasion by ground forces on April 22nd. Raysor pulled out of the 408th formation with mechanical problems shortly after takeoff and tried to land at Gusap. The plane flew into the ground a mile short of the strip, killing all but three aboard. (Milford H. Cummings Collection)

These men would be the first casualties in what was to be a dark day in the history of Fifth Air Force, although this was the only crash in the 22nd Bomb Group not affected by the terrible weather later that day. Click on the Black Sunday tag if you want to read more stories from the 22nd or other units that were involved on the April 16th Hollandia raid.

This story can be found on p. 237 of Revenge of the Red Raiders.

9 thoughts on “Crash Landing at Gusap”