Wewak and Boram were the targets of the 38th and 345th Bomb Groups, respectively, on November 27, 1943. Leading the 500th Squadron over Boram was Assistant Operations Officer Capt. Bruce Marston. The strike started off well enough when B-25s flying over the hillside caught the Japanese by surprise. As they neared the airfield, pilots opened the bomb bay doors to drop parafrag clusters on the runway. Marston in his B-25 HITT AND MISS, was followed by 1/Lt. Alfred J. Naigle on his left in BUGGER OFF. On Naigle’s left was a B-25 nicknamed WATTUM-CHOO.

Just as Naigle began to unload his parafrags, his co-pilot diverted his attention to the sudden shift in WATTUM-CHOO’s location from next to BUGGER OFF to right above it, with bomb bay doors open. Naigle quickly radioed the pilot to not release his parafrags and attempted to get out of the way of the B-25. White parachutes began leaving WATTUM-CHOO and Naigle ducked as a parafrag cluster shattered the cockpit canopy, nearly cutting the aircraft in two pieces as it dragged the astrodome and turret dome down through the fuselage. Naigle and gunner S/Sgt. Wayne W. Hoffman were injured, with the pilot only conscious because he was wearing his steel helmet as the top of the cockpit came crashing down on him. 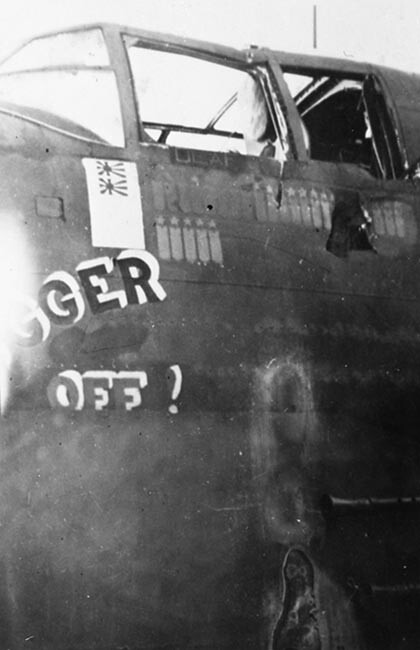 With 1/Lt. Alfred J. Naigle struggling with the controls, BUGGER OFF came off the target at Wewak on November 27th with heavy damage. The plane off Naigle’s wing overflew him during a bomb run and dropped a string of parafrags on top of him. This photo shows some of the damage to the cockpit and fuselage of BUGGER OFF. A piece of the iron fragmentation wrapping around one of the bombs can be seen sticking out of the window of the fuselage at lower right corner of the cockpit window. (Alfred J. Naigle Collection)

The B-25 itself was also severely damaged. The left engine was vibrating enough to potentially break the plane apart, the left nacelle and propeller had also been damaged and the rudders were gouged and dented. Naigle pulled away from Wewak to jettison the rest of his parafrags and feather the propeller. Seeing the impaired B-25, several 38th Bomb Group planes formed up to escort Naigle and his crew as far as they could go. Naigle was able to fly more than 200 miles to Dumpu, where he made a successful landing. He was followed by one of the 38th B-25s, who took Naigle’s crew back to base. The pilot was taken to an Australian field dressing station, then sent on to Nadzab.

Find this story and many others in our book Warpath Across the Pacific.