This week is the 75th anniversary of the Battle of the Coral Sea, so we thought we’d discuss this unusual engagement of World War II.

As of May 1942, the Japanese expansion of territory in the Pacific had nearly reached its peak. The biggest danger was in the south: the last significant Allied base on New Guinea, Port Moresby, was under continual air assault and vulnerable to a sea-borne invasion force. If the Japanese were to capture Port Moresby, they would be able to launch air raids on Australia itself, which would threaten invasion of a nation that was already reeling from a series of losses over the prior six months.

To that end, a large strike force composed of three aircraft carriers, more than a dozen escort warships, and transports carrying over 5000 soldiers were sent to the Coral Sea, where they were to sail west to Port Moresby. Fortunately, the Allies had intercepted signals conveying the attack, and positioned a task force of similar strength in the Coral Sea.

By May 3rd, both forces were in position, but neither had yet spotted the other. Scout planes were sent up, from the Japanese carriers, American carriers and also from Port Moresby. The crew of Lt. Roland “Dick” Birnn, from the 3rd Bomb Group, were flying a B-25 medium bomber on May 4th when they spotted the Japanese carrier Shoho near the island of Guadalcanal. Three Zero fighters took off from the deck of the carrier, but Birnn had immediately turned around and escaped before they could engage.

By this point, word had spread at Port Moresby about the imminent threat, and the air was tense. The administrative officers of the base were preparing to destroy everything valuable in the event of a successful landing. Eighth Bomb Squadron, of 3rd Bomb Group, was preparing to fight to the last man. Their C.O., Floyd Rogers, gave a mission briefing that was more like a pep talk, encouraging them to hit the Japanese with everything they had as soon as it was in range. The airmen started wearing their parachutes when on alert for a mission. 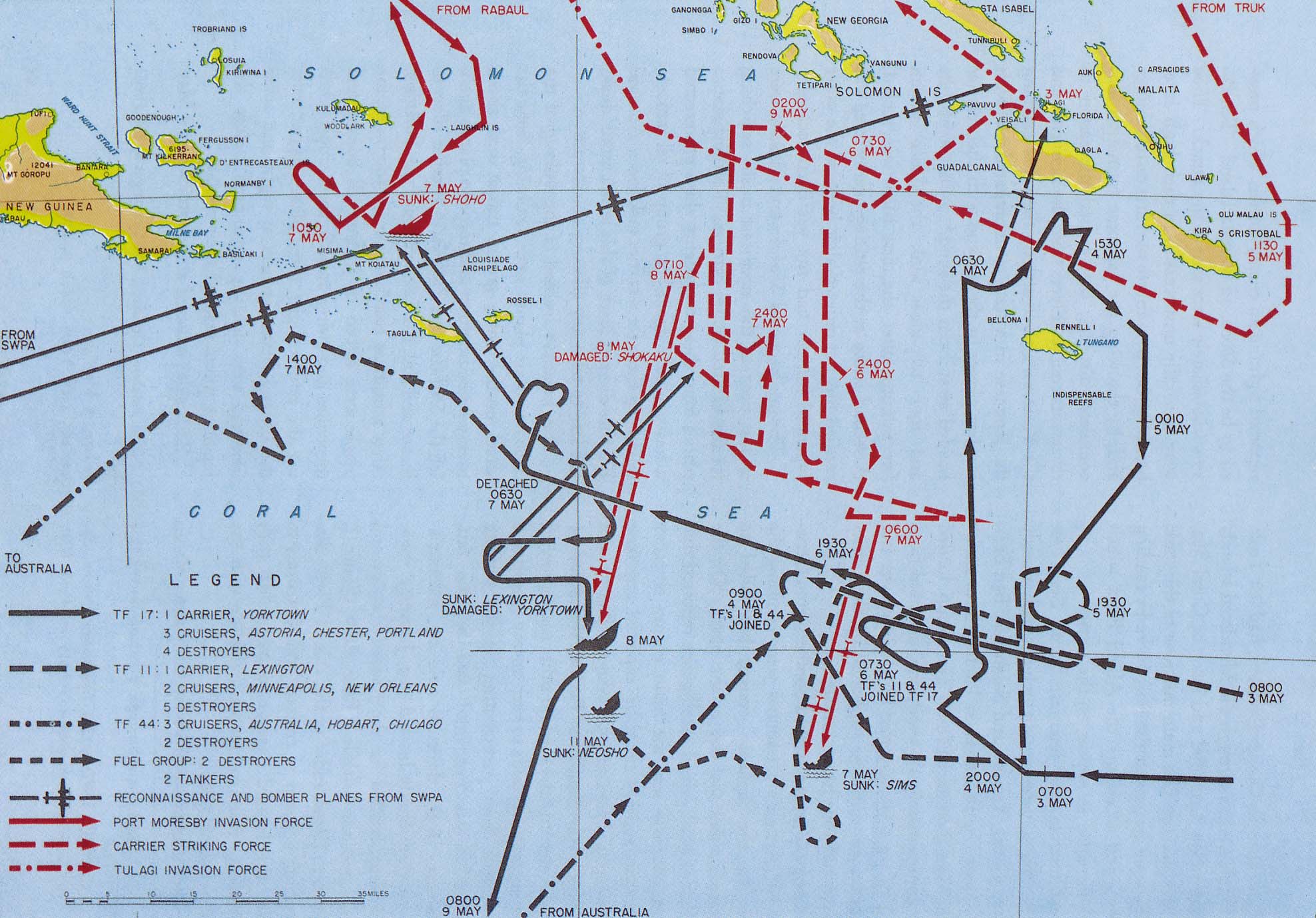 A map showing the movements of naval forces during the Battle of the Bismark Sea. (United States Army Center of Military History via Wikipedia)

On the 6th, with the Japanese maneuvering closer to New Guinea, scout ships were flying missions on a constant rotation. An RAAF Hudson spotted Japanese ships at 8:25 AM, the 19th Bomb Group’s B-17s flew an unsuccessful bombing run at 10:30, and at 12:10, Lt. Gus Heiss, of the 3rd, spotted the convoy again. He was sent directly to the head of the intelligence department to report his findings, and between them all, it was clear the two forces would be within striking distance that evening.

Interestingly enough, that’s actually where the story ends, at least for Port Moresby. The actual fighting was conducted almost exclusively by carrier aircraft over the 7th and 8th. The land-based groups held back their planes for when the Japanese were about to land, an event which never occurred. The Japanese forces were driven off in a costly engagement for both navies, but they were never able to engage New Guinea proper. In fact, most of the men at Port Moresby weren’t even given any information about the battle deciding their fates. They were stuck listening to broadcast radio or even reading the paper.

10 thoughts on “Preparing for the Battle of the Coral Sea”