By August 1944, months of Allied advancement in the Southwest Pacific had forced the Japanese back to the port town of Utarom and its airdrome, Kaimana, their only major airfield left on New Guinea. On the 11th of that month, 24 A-20 crews from the 386th and 387th Squadrons were briefed by Maj. William Pagh, who told the men that there were multiple antiaircraft guns guarding Kaimana and pointed out their locations. He recommended that they stay out of the range of the guns. Targets for the mission were mainly barges just off the Utarom coastline.

Arriving over Utarom with Pagh in the lead position, the pilots spread out as they looked for targets. Pagh spotted a couple of barges off Kaimana’s shoreline, and, ignoring his own advice from earlier, made a run on them. As he pulled up and exposed the belly of his aircraft, an antiaircraft position on the north end of the runway opened up. The right engine of Pagh’s A-20 was fatally damaged, leading the plane to drop and cartwheel into the water. Pilots who watched the scene said that the “hill north of the strip looked like a solid sheet of flame from 8 to 10 M/G machine gun] positions there.” 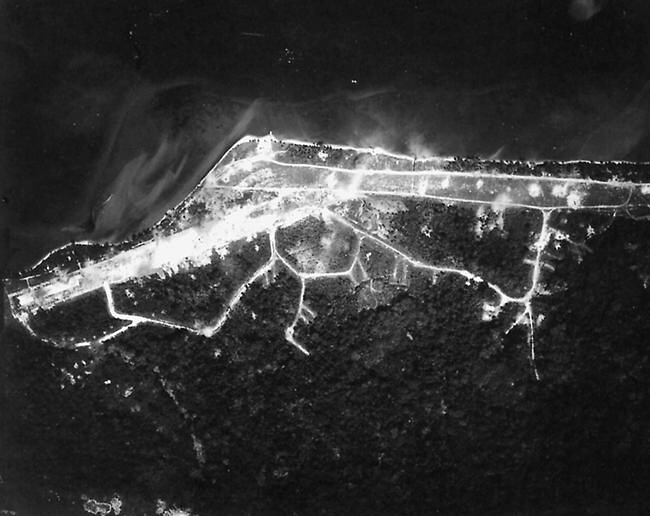 By August 1944, Utarom was the last major Japanese operational airdrome in Dutch New Guinea. On August 11, 1944, Maj. William S. Pagh, the Group Operations Officer, led the 386th and 387th Squadrons in an attack against it and was shot down and killed. (Claud C. Haisley Collection)

Utarom was nothing but chaos. Pilots were flying in every direction, making it more difficult to make any sort of attack run without worrying about being hit by an antiaircraft gunner from below or accidentally damaging a fellow crew’s A-20. At some point, the A-20 flown by 1/Lt. Frank W. Wells was hit and he issued a mayday call. While 1/Lt. Frank Hogan had spotted Wells’ plane about half a mile ahead of his own, he did not note any hits. Hogan lost sight of the A-20 soon after and it is speculated that Wells crashed into the sea.

Once it was time to head back to Hollandia, Hogan looked for the other A-20s in his squadron, picking up Capt. Joseph B. Bilitzke flying in BABY BLITZ. Both pilots circled the area, looking for any sign of Wells or any other 386th aircraft that still might be in the area. BABY BLITZ was suddenly hit by flak, damaging both the rudder and vertical stabilizer, and knocking out most of Bilitzke’s instrument panel. Hogan and Bilitzke then headed for the nearest base, Owi, and Bilitzke made a hair-raising landing with four armed bombs still in his bomb bay. The bombs, three of which were secure and the fourth hanging precariously, were defused the next day.

Reflecting on the day’s losses, pilots realized that the location of the barges may have been a trap meant to lure pilots towards shore gun installations. While the briefing prior to the mission discussed the locations of the biggest antiaircraft guns, it’s possible that the locations of other nearby antiaircraft guns had not been mentioned. Pilots were also inadvertently putting their lives and the lives of their gunners at risk by exposing aircraft bellies to antiaircraft fire. Overall, the mission to Utarom was painful for the 312th.

6 thoughts on “Tough Day at Utarom”