By late October 1942 Maj. Tom Gerrity, then C.O. of the 90th Squadron, was scheduled to be rotated home along with the other veteran pilots of the 27th Bomb Group who had been evacuated from the Philippines. Before leaving the Pacific Theater, Gerrity wanted to attempt an ambitious solo strike against the Japanese stronghold of Rabaul on the island of New Britain. An extra set of internal wing tanks had been installed in his B-25 Mitchell bomber to give them the necessary range for a mission scheduled on October 25th. Flying with Gerrity was co-pilot 2/Lt. Robert F. “Ruby” Keeler, veteran bombardier T/Sgt. Kirby Neal, turret gunner Sgt. Joe Champagne and radio operator Sgt. Billy Graham of the RAAF.  However, due to engine trouble they were unable to reach the distant target and returned to Port Moresby. The next day Gerrity assigned himself the morning reconnaissance flight and used the opportunity to make multiple strafing attacks against the Japanese base at Salamaua. By noon he had packed his bags and was on his way to Australia, arriving back home in California on November 5th.

Gerrity would soon rise to the rank of General in the U.S. Air Force. He passed away in 1969 and was interred at Arlington National Cemetery. Both Lt. Keeler and Sgt. Kirby would be killed before the year was over while the two gunners, Joe Champagne and Billy Graham, would complete their combat tours and also return home. 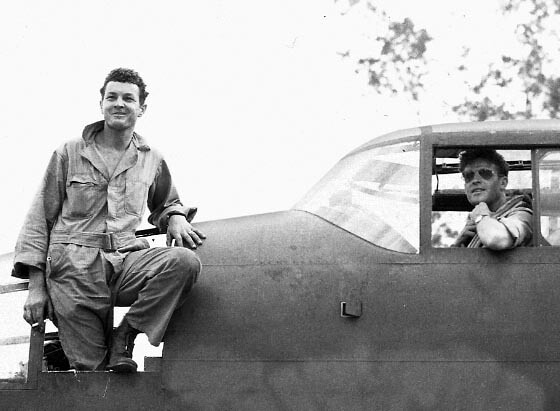 On the left side of the photo in the B-25’s nose is Sgt. Neal. Major Gerrity is to the right in the cockpit. (Gordon McCoun Collection)