Tainan, Formosa was to be the target for the 408th and 33rd Squadrons of the 22nd Bomb Group on April 14, 1945. The crews hoped to destroy Japanese kamikaze aircraft as well as their runways. After taking off, the 408th Squadron joined up with the 2nd Squadron, thinking the B-24s belonged to the 33rd Squadron. It wasn’t until the 2nd passed Tainan on its way to Taichu that 2/Lt. Richard S. Cohen, the lead navigator of the 408th figured out something was amiss. He went up to his pilot and suggested that they make a 180 degree turn if they wanted to attack Tainan. As the aircraft arrived over Tainan and lined up for bombing runs, they were targeted by the gunners below, who hit five of the six 408th B-24s.

Still, none of the planes were brought down by the antiaircraft fire. The bombing runs were a little more challenging, as the pilots had to perform evasive maneuvers, but both the 33rd and 408th Squadrons were satisfied by the amount of damage caused: several fires were started in a revetment area, buildings, as well as three oil and gas fires. It wasn’t long before the squadrons formed up and headed back to their base at Clark Field. Second Lieutenant Rudolph L. Riccio was having a hard time keeping up with the 408th formation in his B-24 TEMPERMENTAL LADY, which had a cylinder head shot off during the raid, two feathered engines, and a damaged hydraulic accumulator. First Lieutenant John K. Mires noticed the slow B-24 and hung back with Riccio’s plane just in case they were jumped by enemy fighters.

Upon approach to Clark Field, Riccio and his crew assessed their situation. TEMPERMENTAL LADY was going to be facing a tough landing without brakes or hydraulic power on two fully functioning engines, with a third sort of functioning. He asked his crew if they preferred to bail out or wanted to sit through the landing. All chose the latter. To help the plane stop, parachutes were tied to the waist gun mounts and opened immediately after the B-24 landed. Further complicating the landing and taxiing was a strong crosswind that was blowing the plane to the right. Riccio was forced to apply power to the #4 engine to counteract the wind, which didn’t help slow the aircraft. He was faced with two choices: either go off the end of the runway and hit a bunch of crates and vehicle or cut the power and let TEMPERMENTAL LADY drift into a ditch. Riccio chose the second option and the B-24 rolled to a stop in the ditch. 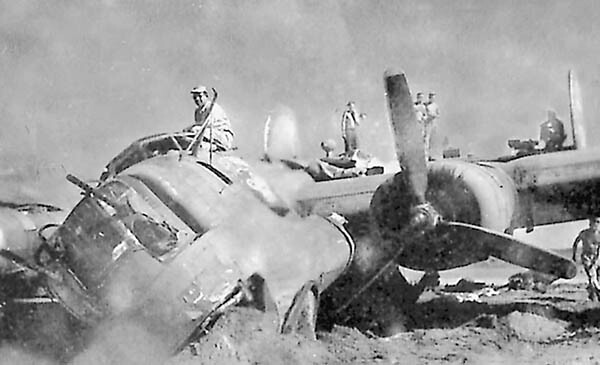 Everyone got out safely and without injury. Later, crews were trying to pull the aircraft out of the ditch and broke its back. Once the plane was finally being towed away, the cockpit area was destroyed when the plane caught fire after electrical sparks hit the still-connected batteries. Thus was the sudden and sad end of TEMPERMENTAL LADY, the oldest B-24 in the 408th Squadron.

Find this story on pages 399 and 400 of Revenge of the Red Raiders.