It’s been 75 years since the 43rd Bomb Group began the long journey to Australia and the Pacific Theater. Today, we’re revisiting the first part of that journey, which we originally published on Sept. 26, 2014.

For nine years, the Queen Mary was a luxury passenger liner that had been commissioned by the British Cunard Line. August 30, 1939 marked its final peacetime cruise across the Atlantic, and as per request by Winston Churchill, it would be retrofitted and used as a troop ship for the next few years. While Gen. George C. Marshall was hesitant to accept Churchill’s offer, Gen. Dwight D. Eisenhower knew the Pacific theater was in dire need of additional troops. Since this would be the fastest and most efficient way to send additional men, Eisenhower ordered to proceed with Churchill’s idea. The ship went from carrying approximately 2000 passengers in peacetime to around 16,000 troops, the size of an entire army division. Because of its speed and passenger capacity, Hitler supposedly put a $250,000 bounty on sinking this integral part of the Allied troop transport system.

Early on February 17, 1942, the 43rd Bomb Group boarded a troop train at their base in Bangor, Maine for a destination that was still unknown to them. After riding for nine hours, the men arrived at the Port of Embarkment at Boston Harbor, where they would board the Queen Mary. They spent a cold night on the ship, then watched the US coastline fade into the distance at noon on the 18th. There was no public send-off because the ship needed to leave in secret so it could avoid being targeted by German U-boats. Still, a small crowd had converged on the dock to wave goodbye–a comfort for the men and a concern for the ship’s captain about how long their journey would stay secret. 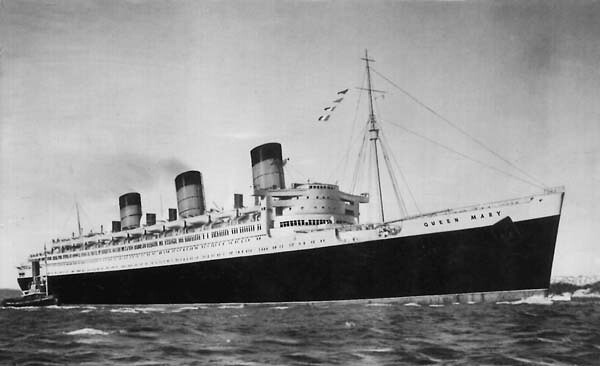 One of the three largest passenger liners in the world, the Queen Mary was a luxury ship during peacetime, as seen here. After refitting, she was capable of carrying as many as 15,000 troops in a single voyage, making her crucial to the war effort. Her importance to the Allies was so great that Hitler reportedly offered a $250,000 bounty to any naval captain who could sink the gigantic ship. By the end of the war, the Queen Mary had carried a total of 765,429 military personnel over a distance of nearly 570,000 miles.

The Queen Mary was escorted by two destroyers at first, but sailed too quickly for the WWI-era destroyers to keep up, and soon left them behind to sail south alone. Meanwhile, then men on board hadn’t been told of their destination and began wondering where they would be going. The ship sailed by the eastern Florida cost, then reversed its course and dropped anchor near Key West, Florida. Two tankers quickly refueled the ship, which was guarded by six sub-chasers and a flying boat during the process. Originally, the vessel was going to stop for fuel in Trinidad, but a submarine was seen lurking in the waters. It was rumored that a U-boat sank the tanker that would have refueled the Queen Mary.

Life aboard the Queen Mary wasn’t too bad for the 43rd. Since the unit wasn’t full of draftees going through basic training, most of the men lived on the B deck, which was only two floors below the open-air main deck. Their rooms comfortably held nine men each, who enjoyed sleeping on deep, inner spring mattresses. The only downside was needing to keep the portholes closed at night, keeping the rooms hot and stuffy. Soon, the quality of food became an issue for the men. The ship’s British crew served the men meals consisting of kidneys or mutton stew–foods to which the Americans were not accustomed. The complaints were addressed on March 2nd during an officer’s meeting and the Americans were happy to find roast beef, macaroni, bread and jam, and coffee at lunch that day. The men were also introduced to the British custom of afternoon tea and went from being puzzled to gladly adopting the tradition.

A typical day on the ship was spent doing calisthenics for an hour in the morning on the sun deck, weapons classes and inspections, as well as fire and boat drills. The guns were fired every day, both as practice and to get the men used to the noise. Free time was spent watching movies or live shows, exercising in one of the Queen Mary‘s two pools, playing poker, and attending religious services. The ship traveled from Boston to the tropics in less than a week. With the heat of their tropical location, sleeping in the cabins became extremely uncomfortable and difficult. On March 1st, the Queen Mary steamed southeast and rumors of a stop at Rio De Janeiro began to fly.