We are highlighting one of the 22nd Bomb Group’s B-24s this week. Its profile history, as well as those of 47 other aircraft from the unit, can be found in Appendix V of Revenge of the Red Raiders.

BIG NIMBO, named after a character from the Lil’ Abner comic strip, was flown to the Southwest Pacific out of Hamilton Field, California on orders dated January 12, 1944, with a destination of the Fifth Air Force Replacement Center at Amberley Field. It was part of a batch of 14 Liberators that had been assigned to newly trained crews at Herington and Topeka, Kansas during December 1943. BIG NIMBO’s ferry crew, led by 2/Lt. George H. Bailey, is believed to have named the aircraft and had the nose art applied before it left the States. While several of the ferry crews were forwarded to other units as replacements, all 14 of the planes in this detachment ended up forming part of the initial complement of B-24s that equipped the 22nd Bomb Group. Seven went to the 33rd, four to the 19th, two to the 2nd and one to the 408th.

The bomber initially went through theater modification before being assigned during February to the 19th Squadron at Charters Towers, Queensland, where it was undergoing transition training. It thus became one of the 13 Liberators assigned to the unit during January and February 1944,with whom it returned to combat operations out of Nadzab in March. The new B-24 was assigned to a ground maintenance crew led by T/Sgt. Jesse G. Smith, a veteran crew chief who had served with the unit from its inception.

Sometime just before the plane was flown to Nadzab, it received its new aircraft designator, a large black “P” that was AV-37 centered on the white patch on the outboard side of both vertical stabilizers. The prominent nickname and nose art appeared only on the right side of the nose. No scoreboard or mission symbols were ever applied. As was typical at the time, the prop hubs were painted in white, the Squadron color. Our profile painting represents the aircraft in these markings as it would have appeared at Nadzab about July 1944. 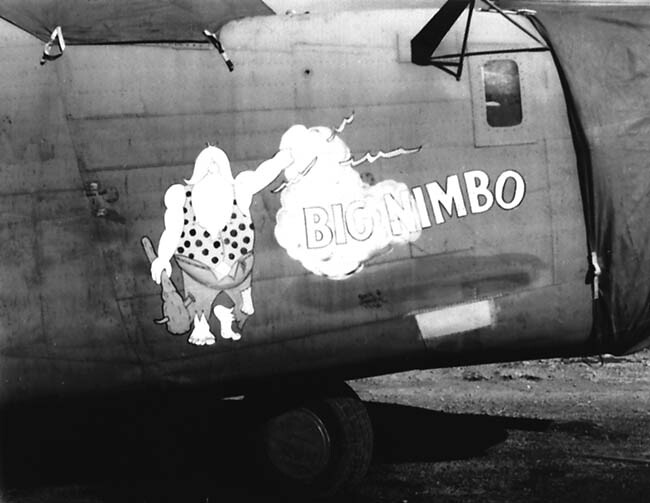 The artwork for BIG NIMBO was almost certainly put on the aircraft back in the States by the crew that ferried it overseas. The cartoon character was from the Lil’ Abner comic series in the newspapers of the time. This plane was one of the original B-24Js assigned to the 19th Squadron at Charters Towers, Queensland, during February, 1944, and was one of the few in that unit to carry nose art. It was written off in a landing accident at Owi Island on July 25, 1944, with 2/Lt. James H. Shipler at the controls. (Claude V. Burnett Collection)

The 19th Squadron’s Air Echelon, including BIG NIMBO, moved from Charters Towers to the new Squadron base at Nadzab, New Guinea, on February 28th, and within a few days was ready to get back into action. Captain George I. Moleski piloted the Liberator on the Group’s first B-24 combat mission on March 10th, a strike against Lugos Plantation on Manus Island. A few days later on March 16th, Capt. Jesse G. Homan was at the controls over Wewak when a burst of flak exploded between the number one and two engines. One of the shrapnel fragments penetrated the fuselage and damaged the hydraulic system, which began leaking badly. After using all the spare hydraulic fluid aboard, the engineer collected urine from the crewmembers and added it to the fluid reservoir. This kept the hydraulic system working until Homan could bring it down to an emergency landing at the forward fighter base at Gusap. During the next three weeks a maintenance crew repaired the plane and the B-24 was flown back to Nadzab, where it returned to combat on April 8th. The crew never mentioned having added urine to the reservoir.

The plane served with the Squadron throughout the Nadzab era, but as was the general practice at the time, it had no specific crew assigned. During the 23 combat missions completed and two more from which it aborted, this B-24 it was piloted by crews led by 16 different pilots; only one flew it more than twice. That crew, led by Capt. Ferdinand R. Schmidt, put six of the last 14 missions on the bomber.

BIG NIMBO’s last combat mission was on July 1, 1944, when Capt. Schmidt flew the plane on a strike against personnel and supply dumps at Kamiri Village on Noemfoor Island. Because of the lack of suitable targets within range, and preparations for a move to Owi Island, the unit flew few missions during the month of July. During this time the B-24s were heavily committed to shuttling equipment and supplies to the new base. The 19th’s Air Echelon moved to Owi on July 24th, but BIG NIMBO, carrying a large amount of equipment and a full load of frag bombs, experienced a partial brake failure while taxiing for departure. The pilot, 2/Lt. James H. Shipler, brought the plane back to its hardstand and a corroded valve in the hydraulic system was replaced. The next day, Shipler took off and had an uneventful flight to Owi. However, when the plane touched down, he had trouble with the left brake. The pilot immediately applied full throttle to the number four engine to compensate, but the right wing of the Liberator hit and badly damaged the nose and cockpit of a B-25 parked along the runway, tearing away several feet of its own wing in the process. Upon inspection it was found that the entire hydraulic system on BIG NIMBO had been badly corroded, undoubtedly as a result of the acidic urine put in it back on March 16th. The aircraft was deemed unfit for repair, and both it and the B-25 were subsequently salvaged for parts. Four months later the Liberator was officially removed from the Government’s inventory on December 8th.