This excerpt comes from a memoir written by 1/Lt. Robert Mosely of the 89th Squadron, 3rd Bomb Group. Given the mention of the Philippines, the events below would have taken place in late 1944 or 1945.

As described earlier, our tent, up on a wooden floor, was a great improvement over out “housing” in New Guinea. I mentioned it earlier but when I got that air mattress in the Philippines it made a world of difference in my sleeping routine. Those Army cots, where I hung over at each end, made sleeping very tough. I must say, as stated earlier though, that I never had trouble sleeping the night before a mission, even on those Army cots; it was uncomfortable but I slept. I do not quite know how to explain it because I do not think of myself as being all that brave but that was the way it was in that war … You would think that knowing you might get killed the next day would make your heart beat a little faster.

While on the subject of housing, we had a happening one night in our area that was quite exciting. It involved centipedes; lots of them. It happened about 3 am one morning. I was awakened almost simultaneously with a sharp pain in my head and the noise of the other guys howling and lamps coming on throughout the area (we had lamps, no electric lights). It was raining and it was the first real hard rain at the start of the monsoon season and it probably flooded those big 4-inch long centipedes out of their ground nests. They then crawled the foundations of our wooden floored tents and into out bunks. They then started stinging the first thing that disturbed them. That was a real live nightmare. It was strange that it happened to all of us at almost exactly the same time. There must have been at least six of us that got stung. There was not much sleep the remainder of the night and there were all sorts of centipede stories the next day.

With regard to hygiene, in the Philippines, we showered in a makeshift thing that was made out of an old 50-gallon oil drum. It was mounted up on a scaffold like thing a little higher than our heads. A spout came out of the bottom of it. Somehow water was pumped up and into the barrel and stored there. You then would simply open the spout to take you shower. It sounds crude but I am almost ashamed to mention it when I think about those poor Army ground guys fighting those Japs in those nearby islands. I remember one period we were giving close air support to them when they were fighting on the island of Negros. They were all dug in there in their trenches which we could plainly see as we flew over. They would even wave at us. They would shoot artillery shells over into the area where the Japs were, to show us where they wanted us to attack. We would then set up sort of a traffic pattern going in at tree top level over them and then on over to the area they marked for us to attack. We would shoot and bomb anything that moved and if it did not move we bombed and strafed anyhow … after one of these missions I would go back to my tent and could have a drink of combat whiskey they would give us to steady our nerves if we thought we needed it (which I didn’t), take a shower, eat some kind of a meal, and then sleep on my air mattress with a clean sheet. Then the next day we might go back to the same target to help them out again and there would be those same guys down there in that trench waving at us again but you can only imagine what had happened to them in the meantime. You can bet that they had no whiskey, shower, food served on a plate, or a bed to sleep in. Additionally they were probably scared stiff that they might be overrun by Japs that night or that one might sneak into their area under cover of darkness and cut a few throats. 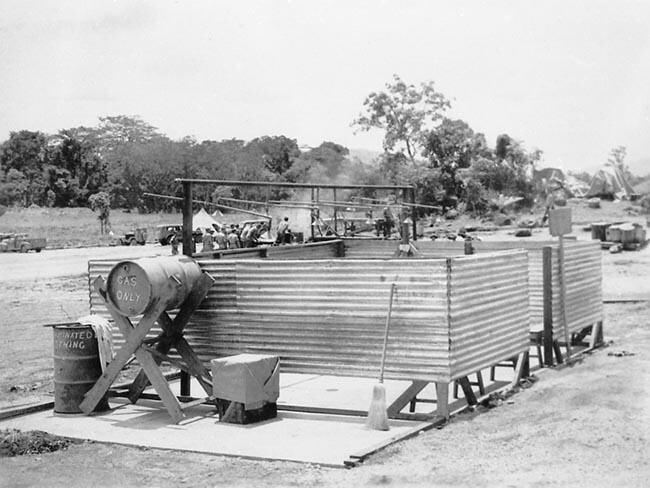 Dated February 1943, this photo shows the shower area that was built for one of the 3rd Bomb Group’s squadrons while they were in New Guinea.

With regard to laundry, we could get little Filipino girls, that were always around where there were troops, to do the laundry for a very small charge. (The native girls in New Guinea had done the same thing for us while we were in New Guinea). It was cute to watch the little Filipino girls doing the laundry. They would take the clothes down to a nearby stream and they would beat the bejeazers out of them over the rocks at the edge of the stream. I guess the rock was the equivalent of the old washboard. I do not think that they had any soap but the clothes always felt better when you put them back on than they did when you took them off.

With regard to food — It was always bad to awful and it got worse in the Philippines than it had been in New Guinea. But, it was likely a lot better than what that Army guy was getting in that trench down on the island of Negros. He was probably getting some of those K-rations that I saw the mountains of on the beach the day we landed on Leyte back in November. I often wondered why we never got any of those things because they would have been better than some of the stuff they were feeding us. They only time we ever got a decent meal was when our cooks would get some whiskey and go down to the docks, there by the airstrip, and exchange the whiskey and some of our bad food for some of that good Navy food. I cannot impress on you enough just how much better the Navy food was than ours. The deal on this whiskey swap thing (I was told) was that the Navy cooks could sluff off some of our bad food on their guys every so often and end up with a bunch of booze (that seemingly the Navy couldn’t get otherwise) and we would get one good meal every now and then, thanks to the cooks coming up with the booze for the swap.

One time the food not only got worse; there was hardly any of it (even bad food). Something must have gone wrong because we were basically out of food and that is not supposed to happen to us Air Corps guys. One day during this period I was down at the flight line and a Sailor walked into our area and said he would sure like to take a ride in one of our airplanes. In so many words I told him I would take him for a ride if he could get us some food. He said that was a deal and told me that if we would come down to his ship at a certain time that night we could come aboard and take all of the food, from down in the hold of his ship, that we wanted. Now, he was going to get his airplane ride but I had no guarantee that I was going to get any food. In fact it sounded like a fishy deal but we needed food so I put him up in that area where you could lay down behind the pilot in a A-20 and gave him a ride he probably never forgot and sent him happily on his way. That night Morgan, Smith and I got a Jeep and went down to the docks and found his ship and so help me there was no one around. It is hard to believe that in wartime such a thing was possible but that was the way it was. We went aboard and I went down in the hold of the ship and there were boxes and boxes of food. I started throwing boxes up out of the hold to Morgan who was on the deck and Smith was taking them off of the ship down to the jeep. I must have tossed 6 or more boxes to Morgan but suddenly Morgan was no longer there. I called for him and there was no answer.

After a bit I decided that something must have happened so I climbed out of the hold and found that I was the only person around; there was no Morgan, no Smith, and no Jeep. It was kind of like a bad dream. I was wondering what I was doing there. I knew what I went there for but suddenly being all alone I was beginning to wonder if what appeared to be happening was in fact really happening. I just stood there for awhile not knowing what to do. I had no transportation (and certainly had no business being on that boat) and wondered how I could get back to my camp, which was several miles away. So I just sat down on the barrier like thing, around the hold, and tried to think how to get out of that bad dream. I must have sat there for 5 or 10 minutes (still no one around) when I saw the lights of a vehicle approaching the dock. I could soon tell that it was a Jeep and shortly I could tell that it was Morgan and Smith. I hurried off of the ship and ran down to meet them and immediately started giving them hell for running off and leaving me.

They did have a half ass excuse, when Smith explained that on one of his trips to the Jeep, with a box of food, he saw the Shore Patrol coming. He in turn told Morgan and, without saying a word to me, they panicked and jumped in the Jeep and headed out down the road. The Shore Patrol saw them and started chasing them. They tried to turn off on a little side road and turning their lights off but the Shore Patorl was not fooled and caught them. The funny part was that the Shore Patrol somehow had the idea that they had whiskey in those boxes. When they found out it was just food they let them go without asking any further questions. So once they were free, they came back to pick up their old buddy who they had left down in the hold of that ship without so much as a word of warning. Well, I certainly got a glimpse of the true character of those two “buddies”. But I might have done the same thing (I really don’t think I would have) so I forgave them. For about a week we did not go near the mess hall. We ate off of our loot.

That completes Housing, Hygiene, and Food.