Within the first year of the United States entering World War II, the country faced the task of moving airplanes and their crews to their destination of the far-off Pacific Theater. While most of the men spent about three weeks aboard a ship, some arrived in Australia by plane in August 1942. A few months earlier, the air force had decided it wasn’t practical to ship B-25s and B-26s to the Pacific Theater, and flight crews from the 71st and 405th Squadrons had to ferry their own newly built B-25s on an island-hopping route from California to Australia. This had never been done with any other unit that arrived in Australia prior to the 38th Bomb Group. It would be a nail biting experience, as the crews had little room for navigational error or mechanical trouble.

Before making the first and longest flight from Hamilton Field, California to Hickam Field, Hawaii, the B-25s had to be outfitted with two large fuel tanks installed in the top and bottom of the bomb bay, a third tank in the bombardier’s spot, and, in case those weren’t enough, a 25 gallon fuel tank was also installed on the wings of some of the B-25s. To increase fuel efficiency, each plane was also stripped of guns and armor. Bombardiers and gunners, whose spots were occupied by fuel tanks, were sent to Hawaii by a transport plane along with the guns and armor from the B-25s. After plenty of tinkering and testing, engineering crews were ready to send the B-25 crews on their way to Hawaii. 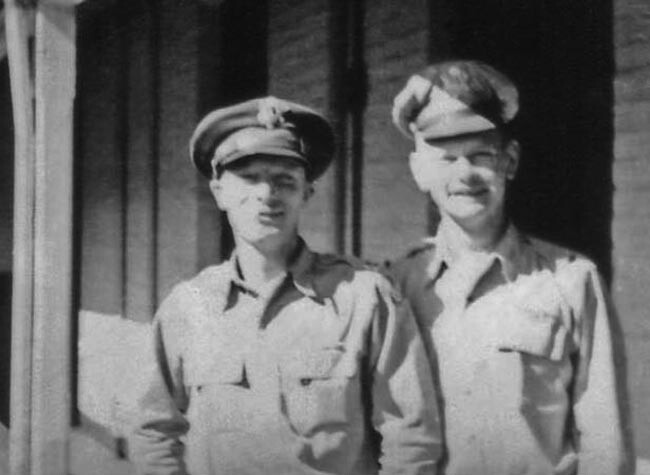 Pilots 1/Lt. Richard T. Sharp and Capt. Alden G. Thompson were part of the flight which departed New Caledonia for Australia during the afternoon of August 14, 1942. Strong headwinds delayed the flight’s arrival in Australia until after dark, and Sharp and Thompson had to crash land their airplanes. (Alden G. Thompson Collection)

Flights began on August 2nd, with four 71st Squadron crews taking off before 0600. Fourteen hours later, they successfully touched down at Hickam Field with little fuel to spare. The rest of the 71st was cleared to join the four crews in Hawaii the next morning. Among them was Capt. Alden G. “Bud” Thompson, flying his B-25 nicknamed BUD AND HIS POGMASTERS. His plane had been modified differently from some of the other B-25s. The fuel tanks in the bomb bay were half the size, with the rest of the fuel to come from tanks on the wings. Unfortunately, the crew had not been told how to transfer fuel from the wing tanks, instead relying on a “tech order” that turned out to be indecipherable. Thompson and his crew turned back for California and landed safely. The small fuel tank was exchanged for a larger one and the crew took off the next morning. They saw a B-17 formation heading in the same direction and joined up with them. Hickam Field was not expecting a B-25 with the B-17s and set off a red alert until the situation was resolved and Thompson and his crew were allowed to land.

The next leg of the trip would be to Christmas Island, followed by Canton Island, then Fiji and New Caledonia, the last stop before Australia. For Thompson, unlike some of the other pilots, the flights between each of these islands had remained relatively uneventful. Still, after two weeks of island hopping, he was eager to get to Australia and refused to spend the night in New Caledonia. Thompson would take the lead position in a flight of five B-25s from New Caledonia to Amberley Field. Crews estimated a five hour flight time, which ended up being far too optimistic. Instead of arriving over Australia before sunset, pilots spent more time battling with strong headwinds over the Coral Sea. WE’REWOLF, flown by 1/Lt. William G. Woods, disappeared. Fortunately, the lost B-25 made it to the RAAF (Royal Australian Air Force) strip at Evans Head with the help of a Fairey Battle escort.

Finally, they saw the Australian coastline illuminated by the moon and the navigator aboard Thompson’s plane tuned into Brisbane’s radio station, which would help them stay on course. Ideally, they would hit the eastern edge of Brisbane, then turn inland for Ipswich and land at Amberley. The problem was, they had arrived south of Brisbane and the coastline they were looking at was not at all what they had expected. Australia had also not expected to see the B-25s until the next day and was completely blacked out. And unbeknownst to the aircrews, the radio signal they were following was not coming from Brisbane, but Grafton, a small town well to the south of their destination.

Pictured here is Capt. Bud Thompson’s B-25, BUD AND HIS POGMASTERS, after a forced landing near Grafton, Australia. Leading a four-plane ferry flight from New Caledonia to Amberley Field, Brisbane, Thompson became lost and approached a blacked-out Australian coast from an uncertain location. After hours of searching for Amberley, Thompson and his wingmen were running dangerously low on fuel, and he decided to take his chances with a blind landing at Grafton. The plane came down on an auxiliary training field, then tipped forward after the nose wheel collapsed into the soft ground of an adjacent cow pasture. (Alden G. Thompson Collection)

Low on fuel, the flight of B-25s needed to land quickly. A corporal at the Australian Signal Station at Grafton’s airport identified the B-25s and tried to contact them in Morse code using the lights surrounding the base’s tennis courts. Private James T. Berry, the radio operator, was given a signal lamp to send a message that the planes needed to land immediately. With the help of the local radio station, the corporal gathered Grafton’s residents to light the airstrip with their cars. BUD AND HIS POGMASTERS made a hard landing and tore through a fence as the plane ran out of room on the short runway. After the B-25 stopped, the nose wheel collapsed in the mud. First Lieutenant Richard T. Sharp, who was very anxious to land, brought his plane down next. Dangerously low on fuel, his plane followed the same path into the mud, with the nose gear snapping off and the plane spinning to a stop.

Circling above them, the two remaining B-25s were sent 50 miles away to Evans Head. As they flew north, the pilots of both planes realized they were also very low on fuel and would not make it. Instead, they decided to bail out. One man was killed and the rest made it safely to the ground. By August 22nd, all of the 38th’s air crews were reunited and the men turned their attention to the war.

5 thoughts on “Making History: Flying B-25s from California to Australia”