First Lieutenant Claud C. Haisley named his P-40N SWEET WILLUMS after his wife, Margaret. A color photo of this artwork enlarged from an 8mm movie film can be found on page 194 of this book. The A-20G that he received at Port Moresby in February 1944, became SWEET WILLUMS II. Haisley flew the aircraft until his departure for the States in January 1945. By the end of his tour, he had 56 missions in this aircraft. Although there was not a specific gunner that always served on the crew with Haisley, Sgt. Albert V. Hanson often served in this capacity. Sgt. Edwin W. Peterson, was the crew chief assigned to the plane.

SWEET WILLUMS II almost met with disaster as Haisley was returning in it from Dagua Airdrome, New Guinea, on May 14, 1944. He had felt sick that morning, but he still decided to fly the mission with his Squadron. Their target was the antiaircraft guns at Dagua, a 90-minute flight. On the return flight, Haisley became quite ill, and struggled to bring the plane back to the base at Gusap. Shortly after touchdown, Haisley passed out in the cockpit, and then he spent ten days in the hospital being treated for malaria. 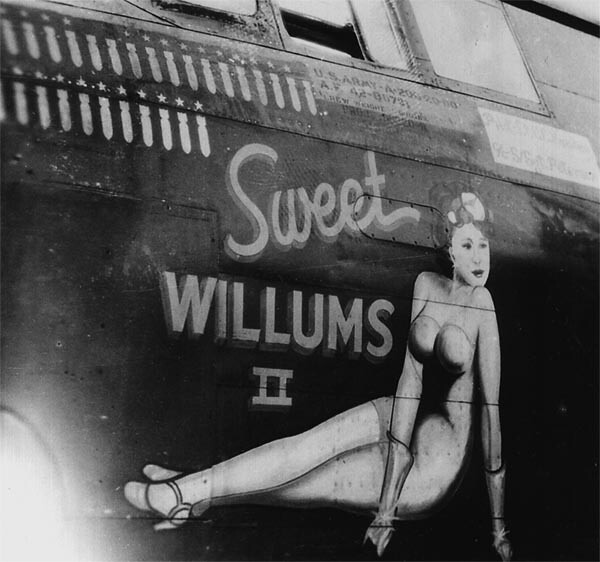 Capt. Claud C. Haisley flew 56 missions in SWEET WILLUMS II. He named the aircraft after his wife, Margaret. On January 31, 1945, 2/Lt. Donald J. Livengood, the aircraftʼs next pilot, was practicing strafing near Ellmore Airdrome on Mindoro Island in the Philippines. When engine failure forced him to ditch in the ocean, he and his gunner, Sgt. Morris B. Wilson escaped without injuries. (W. Stuart Fudge Collection)

Except for the occasional bullet hole, SWEET WILLUMS II experienced only minor combat damage during its career. In January 1945, 2/Lt. Donald J. Livengood took over SWEET WILLUMS II, and on the last day of the month one of the engines failed as he practiced strafing near Ellmore Airdrome on Mindoro Island in the Philippines. Livengood ditched in the ocean, and he and his gunner, Sgt. Morris B. Wilson, were rescued from the water uninjured.

The profile painting shows the aircraft as it appeared in January 1945. Sgt. Edwin W. Peterson, the crew chief used the butter-substitute in the field rations to wax the plane which he believed marginally increased the speed. Other crew chiefs also sometimes did this. Otherwise, the appearance of the unit markings on this A-20 were standard, including the tail letter “L,” but there was no skull and crossbones on the nose. “Mary” appeared on the port outboard engine cowling, probably a wife or girlfriend, or the name of one of the children, of someone on the ground crew. The plane carried a standard white crew ID panel under the cockpit, with lettering in a flowery style: Pilot – Lt. C.C. Haisley, followed by c/c – S/Sgt. Peterson. The mission scoreboard was somewhat unusual as the black bomb-style mission markers were painted on a white background. These consisted of two rows of 35 each, followed by two more rows of 20 each, giving a total of 110 missions displayed. No details of specific missions are known for this aircraft.

This aircraft profile comes from Rampage of the Roarin’ 20’s.