This week, we’re bringing you another entry from the diary of Donald P. Hall, a member of the 3rd Bomb Group’s 89th Squadron.

Orders came through to attack 8 gun position of ack-ack at Soputa. Ed Larner and Klatt were on my wing. This would be a tough nut to crack as that close concentration of guns could be pretty mean. The B-26s were to come in after we dropped our parachute bombs and also bomb the position. The B-26s messed up as usual and bombed at 9:30, which was the exact time we were to bomb, so I had to delay a half minute until their string was out of the way. Some of them were still going up as we reached the target at about 50 ft altitude. All ack-ack started to shoot at us. I had turned on the movie camera that I had mounted in the ship, so I should get some beautiful shots.

On releasing our parachute bombs we dove for the trees but not before a large caliber gun hit me. The cockpit filled up with smoke and I thought surely I was on fire, but the controls felt OK.

An ack-ack shell exploded under Larner’s plane kicking the tail in the air which caused him to hit the trees. He ploughed along through the top of the trees for 150 feet and then got back into the air. He called me and said he was heading back to Port Moresby. I hoped he could make it. Klatt and I headed back on tops of trees for the Jap guns again. I could see that lots of them had been silenced. About four started shooting at us, so Klatt and I rode down the barrels of their guns and eliminated their crews. A photograph of the place indicated a dump at the end of the clearing so we decided to get it. I could see it was camouflaged, but a long burst caused the whole pile to explode. Huh! I thought, that wasn’t supplies. That was ammunition. So much the better. 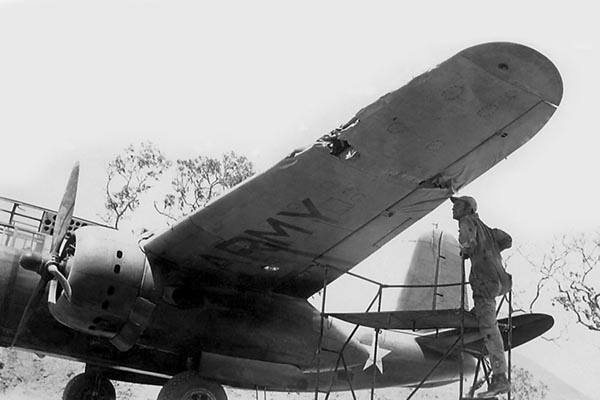 A man inspects the A-20’s wing damage after all the tree chunks were cleaned out.

Klatt and I made one more run to get the last gun firing which we did. Also shot up about 20 Japs in dive trenches. We were well on our way back home when Klatt, who was flying right beside me, called and said I had a large hole or two in my engine nacelle. He said it probably had hit my retraced landing gear. I hoped not, but waited to get to the field and then lowered it. Lt. Klatt then flew under me and looked at it. “It’s OK DP” he called.

After we landed we looked at the holes in my right nacelle, two of them about 8” across. I suppose being right over the gun muzzle hadn’t given the shell a chance to explode. Also, I was very lucky as the shell hadn’t hit any vital spot. My luck is still holding out as that was the 8th hole put through my ship.

Ed Larner landed shortly after we did and his ship was a mess. Nose section caved in, both leading edges of wings smashed, and engine cowling folded up. Big hunks of trees sticking in it. Also the bottom of the ship ripped out. He was a very lucky boy and nothing but an A-20 could take such treatment and fly. My gunner said, “Major only two people will know how scared I was—Me and the laundry man.”