From Ken’s Men to the Air Apaches, units of Fifth Air Force had thought of a wide variety of nicknames for themselves. This week, we thought we’d cover the origins of the sobriquets for the 312th, 22nd, 43rd, 38th and 345th Bomb Groups.

The Roarin’ 20’s: The 312th Bomb Group gave themselves this nickname in late March or early April 1944. For the most part, their insignia of a lion jumping through the zero in 20’s wasn’t added as nose art. The men usually used their group logo for signage and patches.

Ken’s Men: Over their years of service during WWII, the 43rd Bomb Group looked up to three men in particular: Gen. George C. Kenney, Brig. Gen. Kenneth Walker and Maj. Kenneth McCullar. Walker and McCullar were killed in action, but the stories of their leadership stuck with the Group for the rest of their war. To honor them as well as Kenney, they adopted the nickname of Ken’s Men sometime in 1943. The noses of the Group’s B-24s were adorned with Ken’s Men in big block letters.

The Red Raiders: In March 1944, the 22nd Bomb Group began transitioning to the B-24 Liberator. Along with this transition, they moved to Nadzab and soon thereafter decided to name their unit after their redheaded Group Commander, Lt. Col. Richard W. “Robbie” Robinson. The Group also adopted an insignia consisting of a bust of Viking warrior Erik the Red. As with the 43rd, the men of the 22nd also painted their logo on their B-24s.

The Sun Setters: Japan, also known as the Land of the Rising Sun, invaded many countries in the Pacific during WWII. In response, the 38th Bomb Group nicknamed themselves the Sun Setters as they flew missions to keep the Japanese at bay. Between 1941 and 1946, their logo consisted of an eagle sitting on the Japanese Rising Sun symbol, with four bombs converging over the sun. As far as we can tell, there doesn’t seem to be a clear date regarding the adoption of this sobriquet. Similar to the 312th, the men of the 38th Bomb Group didn’t usually add the group logo to their B-25s. The photo below shows one plane that did. The Air Apaches: The 345th Bomb Group moved to Biak in early July 1944. A few weeks before their move, they had been debating on a new nickname for the Group after the “T.T.T.’s” (Tree Top Terrors) didn’t hold much interest. Major John “Cliff” Hanna suggested the “Air Apaches” and the men quickly warmed up to it. They organized a contest to design an insignia, which was won by a Native American member of the unit, Sgt. Charles Pushetonequa of the 498th Squadron. His winning entry showed the head of a Native American dressed in a full war bonnet. Men added the logo to their B-25s tails. 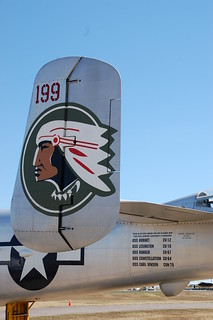