About an hour and a half after 1/Lt. James McGuire crashed in Yulin Bay on March 30, 1945, a Japanese patrol boat inspected the crash site. Men hauled McGuire and the other survivor, 2/Lt. Eugene L. Harviell, aboard, then offered them some tea. The men gratefully drank it and let the sun warm them as they rode back to shore. The Japanese tied their hands behind their backs and led them off the boat, through a bad-tempered crowd (someone threw a rock at McGuire) and onto a truck. From there, they were taken to Samah, where they would spend the rest of the war as POWs. That night, McGuire and Harviell were given bottles containing tea, but no food. They spent a long, uncomfortable night wondering if they would be shot the next day. 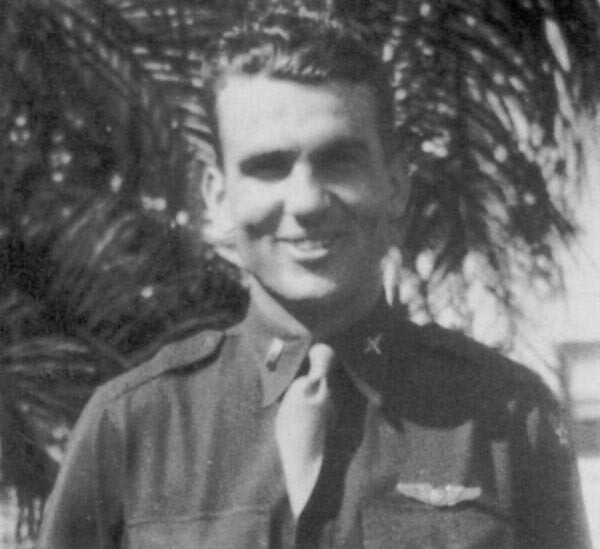 The next morning, they were untied and each given a tennis ball-sized portion of rice, followed by some tea. Afterwards, they were interrogated separately about MacArthur’s plans and the base’s dispersal area. A few weeks before their capture, the 345th had been told by a Navy intelligence officer to tell the Japanese whatever they wanted to know in order to avoid being tortured. At this point of the war, it wouldn’t matter if they had this information. The interrogations stopped after a couple of days.

A couple of weeks into their imprisonment, Harviell, who had suffered burns on his entire right side before the crash, was given treatment. Though the POWs were not beaten or tortured, as happened at other Japanese POW camps, they didn’t receive nearly enough food and water. Their diet consisted of white rice, tea, “fish soup” (warm water that tasted fishy) and on rare occasion some seaweed. McGuire befriended one of the guards who brought the men a little extra food or vitamin powder a few times and did other small favors for them. But without proper nutrition or real medical care, the men continued to deteriorate. By the end of July 1945, they suffered from malaria and beriberi, a vitamin deficiency that swelled the lower limbs and caused pain when walking. Harviell was left unable to stand, and the Japanese guards punished him by shrinking his already small rations. On death’s door, Harviell simply stopped trying to live.

Six days later, the atomic bomb was dropped on Hiroshima on August 16th. The three remaining prisoners on Samah were taken to a nearby hospital and treated for their illnesses. From then on, they were also given nourishing meals as well as alcohol. McGuire and the other prisoners finally left the island at the end of the month, and eventually returned to the U.S. after further recuperation in Allied hospitals.

5 thoughts on “Shot Down over Yulin Bay: Part 2”