For the 500th Squadron, planes were hard to come by in late March 1945. A quarter of their B-25s and crews had been lost over the last month, with additional planes being grounded due to combat damage. The remaining crews felt stretched thin as they continued to fly missions over the South China Sea. On this particular day, March 30th, 1/Lt. James McGuire was hoping he wouldn’t have to fly, as he felt sick and fatigued. He was slated as a spare pilot for the mission to Yulin Bay (located on the southeast tip of Hainan Island), meaning he would only have to complete the mission if one of the scheduled planes turned back. Unfortunately for him, one of the planes did turn back and McGuire took his place in the flight.

The crews were hoping to find the rest of a convoy that had escaped under the cover of stormy weather the previous day. They flew a few miles beyond the bay before heading back towards it to fool the Japanese guarding Yulin Bay. As the B-25s came over the ridge, they discovered they had not mislead the Japanese who greeted them with heavy antiaircraft fire.

McGuire and another B-25, piloted by Lt. Vernon Sawyer, paired off and began their run over the ships in the bay. He briefly thought of his previous wingmen who had been shot down during recent missions and had a feeling his turn had come. As he neared the ships, there was an explosion 20 feet off his left wing. Shortly after that, there was a second explosion a few feet away from his right wing, and then a fire erupted on top of the wing. Burning fuel was sucked into the plane, setting the turret gunner, S/Sgt. Harvey Baron, on fire. Navigator 2/Lt. Eugene L. Harviell’s skin also began to burn from the fire in the fuselage. 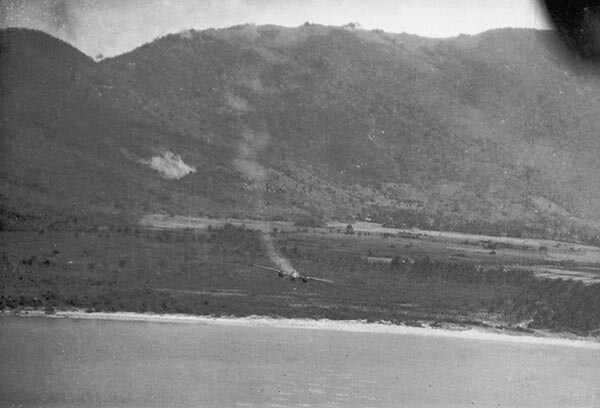 As the plane lost altitude, it continued to burn. McGuire salvoed his bomb load, looking for a spot to ditch. He watched the swells carefully, then splashed down. Transfixed by what just happened, Sawyer nearly followed the B-25 into the water until his co-pilot, 2/Lt. Roger W. Lovett, jerked the plane upwards. Over the intercom, there were reports of McGuire’s B-25 breaking up as it hit the water. Sawyer wanted to go back and search for survivors, but was deterred by heavy antiaircraft fire. It was just too dangerous. The rest of the Squadron headed home, leaving McGuire and his crew behind—if anyone had survived.

Twenty feet below the surface of the water, McGuire still sat in his seat and watched the cockpit fill with water. He tried to stay calm as he struggled to get out of his seat, then realized his seat belt was still fastened. After he undid it, he swam out of the cockpit, inflated his Mae West and used it to help get him to the surface faster. He watched the B-25s disappear from sight, feeling utterly alone, exhausted and in pain from two dislocated shoulders. McGuire saw a badly burned Harviell surface a few feet away. He noticed a wheel floating nearby and grabbed hold of it. The two men floated alone in the middle of the enemy harbor as time seemed to stretch out beyond measure.

The exciting conclusion to this tale can be found here.