In the weeks before the Battle of Manila began on February 3, 1945, ground troop commanders requested the help of heavy bombers to knock out some of the Japanese defenses built on Corregidor and Grande Islands. The two islands would be of strategic import in the coming battle, particularly Corregidor, which sits at the mouth of Manila Bay. General MacArthur approved of this on January 22nd, causing the 22nd Bomb Group to spare the Japanese airfields and give some attention to Luzon.

Liberators from the Group took off on the 24th, each loaded with five 1000-pound bombs. Many targets were marked out, including two large coastal defense guns and ammo installations scattered about Grande Island. Results were excellent, with several bombs hitting a powder magazine and and ammunition storage area. They flew back to base without incident.

On the 26th, the 22nd was scheduled to hit Corregidor Island. Approximately 6000 Japanese men were estimated to be occupying the island at the time. This was a more difficult target from 10,000 feet, as the men, along with two coastal defense guns, were hidden in buried concrete bunkers and underground tunnels. The crews did what they could to hit the guns, but to no avail. Taking out the guns would have to wait until another time. 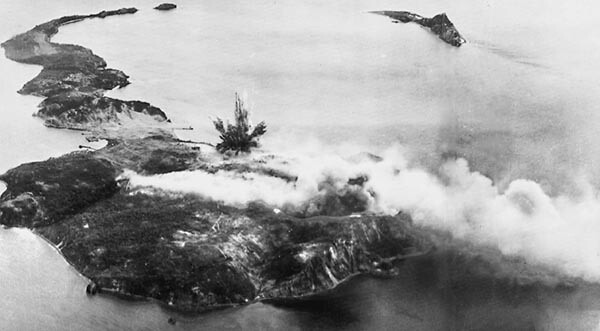 The 22nd Bomb Group repeatedly bombed Corregidor Island in Manila Bay to soften it up for a combined airborne and sea invasion on February 16, 1945.

The next day, the Group went back to Grande Island to focus down two coastal defense guns on the southeast corner of the island. Planes from the 2nd Squadron successfully destroyed the guns by dropping their bombs between the gun emplacements.

January 28th brought another mission to Grande Island. The 22nd were hoping to repeat their success on the two coastal defense guns on the southwest corner of the island. Due to all the secondary explosions and fires, the Group couldn’t quite tell if they had knocked the guns out of commission. This was the final mission for the 22nd during January 1945.

On the ground, Gen. Krueger’s 37th Division reached the east side of Clark Field. They seized it from the Japanese and moved into Fort Stotsenburg. To Krueger’s north, the Eighth Army (there to reinforce the Sixth Army) landed at Lingayen on the 27th. With the extra men available to him, Krueger began the march towards Manila.