Official message from Gen. MacArthur’s headquarters: “On the morning of August 17th, twenty-four Japanese bombers attacked the aerodrome at Port Moresby, which resulted in slight damage to installations and a few casualties.”

For three days, the 22nd Bomb Group had been in standby mode at Seven Mile Drome as they waited for their next big mission. Each B-26 was loaded with six 500-pound bombs, fueled and parked in the open, as revetments had not yet been built. The ten crews were camped out next to their planes, ready to move at a moment’s notice.

During the last couple of months, the Japanese had been keeping an eye on the situation in New Guinea and decided it was about time to improve their prospects there. They decided to move troops and artillery from Rabaul to Buna, and would need a distraction for a successful move. This distraction would come in the form of an air raid on Seven Mile on August 17, 1942.

That morning, Capt. Gammon heard that a Japanese raid was imminent. He ran to his plane, calling to Bauman to start the engines and get ready for an immediate take off. Three bursts from an antiaircraft gun were heard, signaling a red alert. Their early warning system failed and caught everyone completely off guard. As the men scattered, 24 “Betty” bombers in perfect formation approached the airfield at 20,000 feet. Puffs from antiaircraft fire dotted the sky, but were too low to hit the incoming Japanese.

Gammon climbed aboard his plane and headed for the runway with a small crew. As he took off, bombs fell all around his plane, exploding violently, and sending shrapnel into the aircraft. Some of the pieces landed on the bombs in the bomb bay. Quickly, Bauman released the bombs in order to keep the aircraft in one piece. Gammon kept close to the hills to avoid drawing any attention from the Japanese, then circled the runway until the debris was cleared and it was safe to land. He eventually landed with 200 holes in his plane and a shot-up right tire.

When the red alert sounded, Capt. Gerald Crosson was taxiing to the runway with a full crew. He was about halfway down the runway when the bombs began falling and one exploded about 20 feet in front of his B-26’s left wing. As flames from the explosion engulfed the plane and crept towards the bomb bay, the crew abandoned the aircraft as quickly as they could before the bombs exploded. The co-pilot, RAAF Sgt.-PIlot Logan, had been incapacitated by the explosion, so Crosson stayed back to pull him from the bomber. Just as Crosson and Logan took shelter in a crater from one of the bombs, the bombs in the plane blew up. The two men were helplessly caught in flames and a shockwave from the blast. Once the raid ended, Logan and Crosson were loaded into an ambulance. Logan did not survive the journey to the hospital. 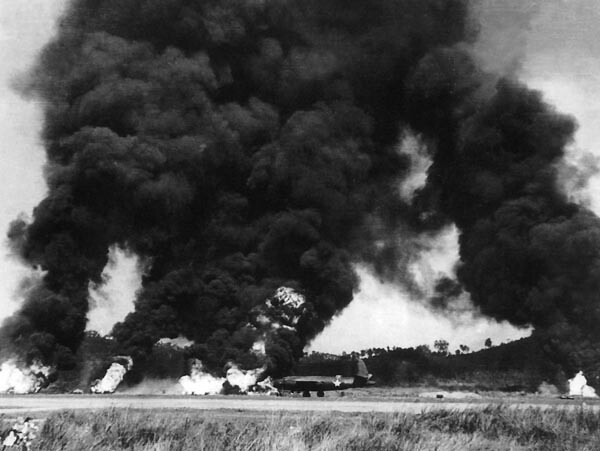 After the raid was over, the 22nd tallied their losses. The message from MacArthur’s office about the raid minimized the results of the surprise attack. One report listed four of their planes as destroyed, as well as three from other groups, and 25 damaged. Pieces of planes, clothes, guns and much more littered the airfield. One thousand barrels of gas and oil burned at one end of the runway, sending plumes of smoke 1500 feet in the air. The Group lost its tower and Operations shack in the raid. The spot where Gammon’s plane had been parked was turned into a giant crater five feet deep and 15 feet wide. For the next 24 hours during the cleanup, delayed action bombs would explode every four or five minutes.

One thought on “Raided!”