Within five months of the U.S. entering World War II, Japan, hoping to reduce America’s naval capabilities, had its eye on island of Midway. This little atoll, sitting 1000 miles northwest of Honolulu and 2195 miles east of Japan, was the last defense between Japan and the Hawaiian Island chain and an important U.S. staging ground for Pacific operations. Given this, Admiral Chester W. Nimitz ordered that the air and ground defenses of Midway should be strengthened immediately. During the early part of May 1942, the U.S. broke the Japanese code and discovered Admiral Yamamoto’s plans for a surprise invasion. The Japanese would be coming with four aircraft carriers, 11 battleships and 150 other ships. Clearly, Nimitz would need all the Allied air and sea power he could muster.

By May 30th, the U.S. Navy started sending out PBY Catalinas to search for the large Japanese fleet. The armada was located on June 3rd, and on the 4th, four B-26 crews from the 38th and 22nd Bomb Groups joined the Navy’s attack on the Japanese fleet. The B-26s had been outfitted with a single Mark XIII torpedo for each plane, which the crews had been briefly been trained to use. As the four crews caught up to the Navy TBF Avengers and approached the Japanese carriers, they were intercepted by 30 Zeros. Five of the six Avengers were soon shot down, with the sixth later limping back to Midway with a dead turret gunner.

While the B-26s dove to avoid passes from the Zeros, they received heavy antiaircraft fire from the ships below. “Ever ship in the fleet looked like it was on fire,” 22nd Bomb Group pilot 1/Lt. James P. Muri wrote. “All guns were pointing at us and firing.” Some guns were purposely depressed to send exploding shells into the water where they would send up huge plumes of water directly in the bombers’ paths. 2/Lt. William S. Watson, a pilot from the 38th Bomb Group, approached the carrier Akagi, and took a direct hit to one of his plane’s fuel tanks. Smoke and flames poured out of the aircraft, which was hit again by a swarm of Zeros, then exploded. All aboard were killed instantly.

The three remaining B-26 crews made their torpedo runs, with Capt. James F. Collins of the 38th Bomb Group going first and launching his torpedo against the Akagi. His B-26’s guns were malfunctioning, but nonetheless, his gunners claimed to have shot down two or three Zeros. After releasing the torpedo, Collins hurried into the clouds to try and lose the Zeros on his tail. His crew became lost as they looked for the way home, but saw smoke billowing up from oil tanks hit by the Japanese on Midway’s East Island. With this signal, they flew home and sat through a rough landing as the nose gear collapsed after the plane landed.

1/Lt. Herbert C. Mayes of the 22nd Bomb Group was having a very hard time controlling his plane, SATAN’S PLAYMATE, due to the number of times it had already been hit. As he dropped his torpedo, his plane sustained further damage from antiaircraft fire. The plane was on a direct collision course with the deck of the Akagi, but Mayes was able to pull up at the last second and skim over the top of the bridge. The damage proved to be fatal, and Mayes crashed into the water between the Akagi and the Hiryu. None survived.

Muri, in his B-26 SUSIE Q, was the last to make his run. As SUSIE Q flew towards the Akagi, the B-26 was attacked by a formation of Zeros, taking out the left top turret gun and injuring the top turret and tail gunners. 2/Lt. William W. Moore released the torpedo, allowing Muri to protect the underside of the plane by buzzing the carrier’s deck. While the plane flew over the Akagi, the nose gunner sprayed the area with bullets, killing two sailors, cutting mooring cables and putting an antiaircraft position out of action. With the torpedo launched, it was time for Muri to escape the fray. He dove towards the ocean’s surface, then pushed his airspeed to outrun the Zeros that were pursuing him. They broke off the attack, the B-26 gained some altitude and Muri slowed the plane slightly. 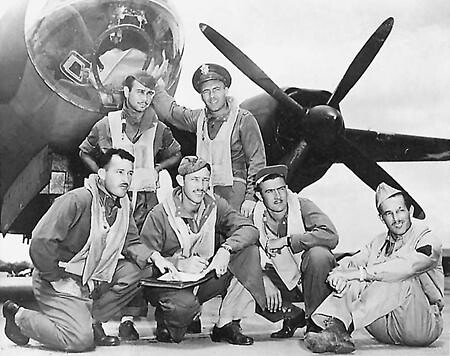 The crew took stock of their situation: they were over 100 miles away from Midway with a bullet-riddled fuselage, a dead communications system, only an approximate idea of where they were and fuel leaking out of punctured tanks. The fuel was transferred into two unpunctured fuel tanks. A sun observation was taken by the navigator to help set them on a general course, then Muri started a square search to find Midway. Like Collins, he noticed the smoke coming from Midway and flew off in that direction. On SUSIE Q‘s first approach, nervous Marine gunners accidentally fired at the B-26, so Muri pulled up and tried again. This time, the guns stayed quiet and Muri landed on his right landing gear, as the left was inoperable. He and his co-pilot discovered the plane’s brakes had also failed. The plane soon lost speed, the left wing dropped and snapped off the left landing gear and the plane skidded to a stop off the runway.

Both Collins and Muri brought back planes covered in bullet holes. Muri’s crew counted over 500 punctures in SUSIE Q, with damage to most of the plane’s systems. Both planes were written off. All four crews were award the Distinguished Service Cross for their valiant efforts. While losses were heavy on the American side, the Japanese fared far worse with the sinking of four of their aircraft carriers. The Battle of Midway was a definitive point in the Pacific war. From this point forward, the Japanese would no longer have the upper hand.

For additional details about the B-26 crews’ experiences at Midway, check out our book, Revenge of the Red Raiders.

We also have a painting for sale depicting SUSIE Q over the Akagi.