The morning of April 12th brought a raid by the 3rd Bomb Group on Davao, located on the southeast coast of Mindanao. This base became a primary target for the 3rd Bomb Group’s raids, as it had been under Japanese control since war was declared. Three P-40s from the Del Monte base made strafing runs, while two others flew on to Luzon to find shipping targets. A group of B-17s caught the Japanese by surprise when they destroyed runways, hangars, gasoline storage and warehouses at Nichols Field. The Japanese Army Air Force at Clark Field was taken by surprise and they were not able to mount a response until after the U.S. bombers were already back in Australia.

That same morning, the 3rd Bomb Group split up into two flights, led by Capt. Robert Strickland and Capt. Lowery, for their morning missions. They flew out separately to Cebu City, approximately 140 miles to the northwest of Del Monte. On the way over, the flight led by Lowery spotted a Japanese transport and Col. Davies decided that each plane should drop a single bomb on the ship. While they claimed it as sunk, Japanese records do not indicate any ships lost.

When Lowery’s flight arrived over Cebu City, the crews discovered Strickland’s flight had already bombed the airfield so it was decided that the five crews would split up: three B-25s would attack two large ships while the other two B-25s would bomb warehouses and onshore docks. They recorded a direct hit on a 7000-ton transport ship, which was probably the transport India Maru. Japanese anti-aircraft gunners shot at the B-25s and one bursting shell sent a piece of shrapnel into Lt. Petersen’s bomber where it failed to penetrate the armor plate behind the seat of Lt. Harry Managan. The B-25 gunners defended their bombers from attacks by four Japanese seaplanes, two of which were claimed shot down. The B-25 flight left for Del Monte with the Cebu docks and nearby buildings on fire. 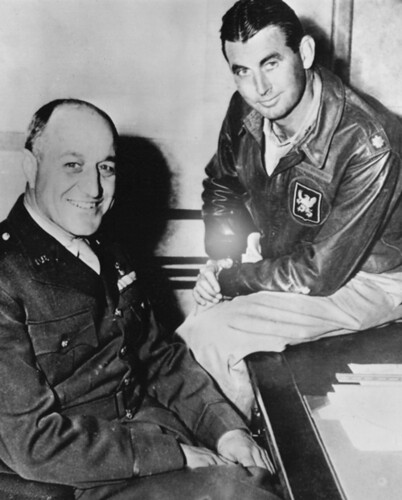 Brigadier General Ralph Royce (left) and Col. John Davies, two commanders of the Royce Raid (April 11–16, 1942), pictured in Melbourne soon after their return from the Philippines.

Both flights got back to the dispersal fields at Valencia and Maramag without incident and the planes were quickly hidden in the jungle to keep them from being spotted by Japanese planes. The 5th Air Base Group’s efficiency refueling and reloading the planes for the afternoon mission greatly impressed the men of the 3rd Bomb Group. Everyone wanted to help wherever possible, and thanks to the cooperative efforts, the B-25s were back in the air at 1330 hours for a second strike.

Not long after takeoff, the single flight was intercepted by two Japanese seaplanes. One of the seaplanes was hit, while the B-25s flew on unscathed. The crews also attacked a large transport on their way to Cebu Harbor and left it listing. When the crews arrived over Cebu the second time around, the Japanese were ready to greet the B-25s with heavier antiaircraft fire. The 3rd Bomb Group persisted in their attack, dropping 25 500-pound bombs on various targets and strafing buildings.

The next day, the crews flew two more missions, this time to Davao, where they targeted floatplanes and ships in the harbor. After the missions on April 13th wound down, it was time to get the B-25s back to Australia before the Japanese were able to locate the base and launch a strike against them. Upon their return to Australia, Royce, Col. John Davies and Lt. Jim McAfee flew to Melbourne for interviews and to report to Gen. MacArthur. All the B-25 crews received medals for their participation in the raids and the media pounced on their success.

“The raids obviously threw the Japanese into a terrific panic,” Royce told reporters. “You can imagine their bewilderment when suddenly out of the sky appeared a bunch of bombers that let loose everything on them. They didn’t know where the bombers came from.” A few days later, the Doolittle Raids would reduce the Royce Raid to a brief moment in the Pacific war, but morale was still high. After all, the members of the Royce Raid participated in the longest mission to date without a single death and Australia was proven to be a good point to launch offensive attacks. “We have won our spurs,” wrote McAfee. “We can do a job no matter how much politics there is to it!”

5 thoughts on “The Royce Raid: The 3rd Bomb Group Wins Its Spurs”