On February 26, 1943, a Japanese convoy was spotted by Allied forces at Rabaul. At this point in the war, the Japanese were trying to build up their strength in New Guinea after losing control of the Solomon Islands. Fifth Air Force would try to keep a close eye on this convoy, but due to the weather, could not watch it for two days. On March 1st, the weather finally cleared up enough for a 90th Bomb Group crew to see the convoy on its way from Rabaul to Lae. The crew immediately reported the situation as well as the size of the convoy. With six troop transports, two vessels carrying aviation fuel, a boat full of Japanese marines, eight destroyer escorts, and 100 fighter planes, this was not a target to be missed. B-17s from the 63rd Squadron were soon sent to bomb the convoy, but were thwarted by weather. That night, 1/Lt. William Crawford, Jr.’s crew set off to find and monitor the convoy while Fifth Air Force got ready to attack.

The Battle of the Bismarck Sea began on March 2nd with 25 B-17s from the 43rd escorted by 24 P-38s. At one point, the P-38s covering the 63rd Squadron B-17s encountered some enemy fighters. After the engagement, the P-38s had to turn back, as they were low on fuel. The B-17s flew on alone. Soon enough, the crews were spotted the convoy and were delighted to find it without fighter cover. The B-17s were lining up for their runs when several Zeros seemed to appear out of nowhere. In spite of some close calls, all the planes returned to Seven Mile Drome without serious injuries to any of the crews. The next day would be a little different. 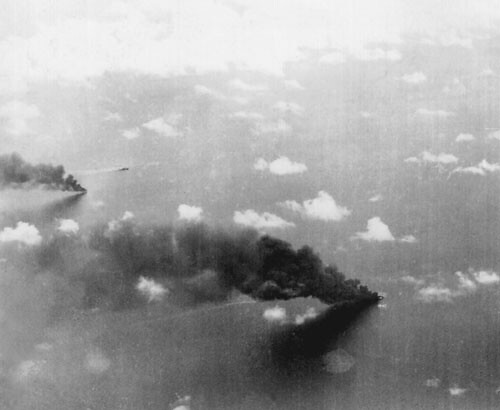 A ship from the convoy burns after it was hit by Allied forces during the Battle of the Bismarck Sea.

The second day of the battle, March 3rd, opened with a frenzy of activity. Planes from the 3rd, 38th, and 43rd were sent to attack the convoy again with fighter cover from the 9th, 39th, and RAAF Squadron No. 30. Before the battle, 3rd and 38th had been practicing a new concept of skip-bombing and this would be the first time the B-25 crews would apply it in an attack. “…It was the greatest show I ever hope to see…The morning was clear and everything was happening at once. I watched the B-25’s score many number of hits, skip bombing. The A-20’s, B-25’s and Beaufighters strafed the decks of transport and destroyers alike and the zeros were attacking anybody and everybody. The P-38’s were having a hell of a fight with them about ten miles west of the convoy. The sky was full of planes. I saw one A-20 or B-25 strafe the deck of a destroyed cause an explosion on the stern which sent doughnut like billows of smoke a thousand feet into the air. When I left for home, at least 10 of the boats were sinking or burning and a lot of our planes still there …”

While the 43rd crews watched the action from above, they also stayed busy hitting the convoy from medium altitude and fending off enemy fighters. At one point, 1/Lt. Woodrow W. Moore in B-17F #41-24356, KA-PUHIO-WELA, was getting ready to make a bombing run when the plane was attacked. KA-PUHIO-WELA dove towards the ocean with its No. 3 engine and radio compartment on fire. Witnesses watched in horror as men bailing out of the plane were machine-gunned by Zeros. The pilot and co-pilot elected to remain with the plane in hopes of regaining control and crash landing in the ocean, only to be killed when the plane split in half and disintegrated before the plane hit the water. 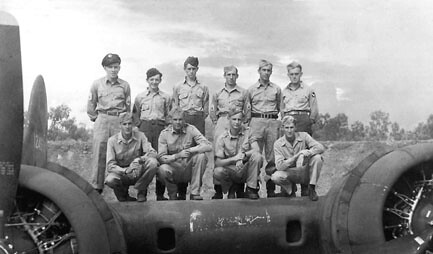 The 63rd Squadron crew of Lt. Moore poses on the wing of a B-17 on February 28, 1943, three days before the entire crew was killed over the Bismarck Sea. (L. Anderson Collection)

After the crash, some suggest that the B-17 was rammed by Chief Flyer Masanao Maki of CV Zuiho. Japanese records indicate his unit was the only one engaging the 43rd and that he had rammed the B-17. He was posthumously awarded a double promotion for his conduct, though it remains unclear whether or not the ramming was intentional. Another member of the 43rd remembers the Zeros being tightly packed that day and wondered whether or not they would ram the plane he was on.

The Battle of the Bismarck Sea would last one more day before going down as one of the most decisive air-sea victories during WWII. The USAAF and RAAF sunk 12 ships and prevented the majority of the troops aboard from reaching Lae, sending a strong message to the Japanese that they would not be able to reinforce their positions in New Guinea without serious repercussions.

Read this story in Ken’s Men Against the Empire, Volume I.

18 thoughts on “Tragedy Above the Bismarck Sea”